Posted in SEO
On 06 Jan 2015
By ClickThrough Marketing

So much has happened in digital marketing since this time last year. And we expect this year to be no different! So now’s the time to make sure you’re up to speed with the biggest PPC and SEO news stories of the last 12 months.

How? We’ve created an interactive infographic with all the OMG moments of 2014. It’s got all the huge stories, plus a few that even the shrewdest marketers might have missed.

To get started, just click on the image below – then hover over the numbers to learn more.

[PS – If you enjoy this post, why not download our most popular FREE ebook of 2014? – Technical SEO Best Practices: A Marketers’ Guide.] 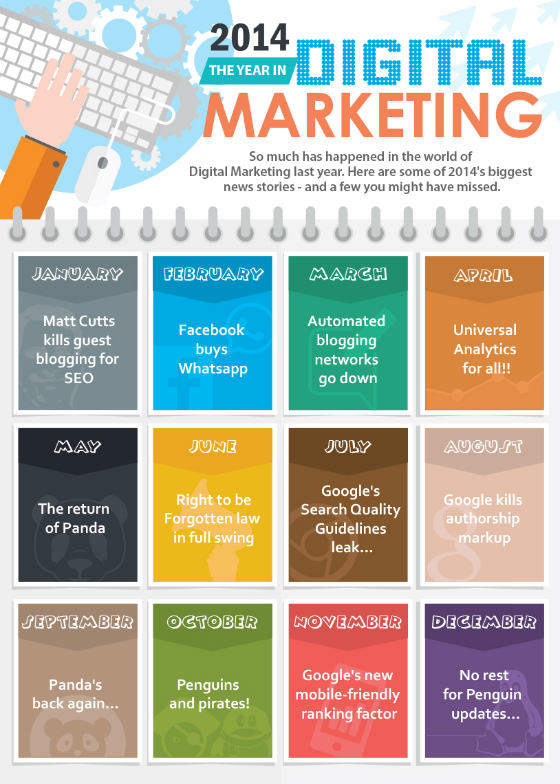 In case your browser can’t display the infographic, here’s the text-only version.

Matt Cutts, Google's head of web spam, set the world of SEO ablaze when he denounced the use of guest blogging as an SEO tactic. ClickThrough insights director Dave Chaffey was quick to respond with 10 tips to help you future-proof your guest blogs.

February saw Facebook announce plans to snap up messaging app WhatsApp in a humongous $19 billion cash-and-shares deal - the biggest in Facebook's history. The deal was eventually completed in October 2014.

WhatsApp founder Jan Koum said at the time: "We’re excited and honoured to partner with Mark [Zuckerberg] and Facebook."

Nearly two months to the day after his infamous post denouncing the use of guest blogs for SEO, Google's Matt Cutts announced the firm had taken action on 'a large guest blog network'.

April – Universal Analytics for all!!

Google Analytics is a familiar tool to anyone in digital marketing, so it was big news when Google released a heavily updated version of the tool. The upgrade, dubbed Universal Analytics, came out of beta in April, and allowed marketers to access new features like cross-device tracking and powerful customisation tools.

May – The return of Panda

On May 20, Google's Matt Cutts announced on Twitter that the search giant was to begin rolling out version 4.0 of its Panda update - the webspam-fighting algorithm that deals with spammy content. Official figures say around 7.5% of English-language search queries were affected.

June – Right to be Forgotten law in full swing

In late May, in response to new EU legislation, Google launched a 'Right to be Forgotten' request form. This allows users to request removal of "inadequate, irrelevant or no longer relevant" results pertaining to a member of the public. By June 4, Google had already received an astonishing 41,000 requests.

Our most popular news story of July covered the leak of Google's Search Quality Rating Guidelines. The document, leaked at Scribd.com, provides guidance to Google's human raters, whose job it is to check the quality of Google's algorithm tweaks. This latest version increased emphasis on 'expertise, authority and trust'.

On August 28, Google officially killed authorship markup - the 'rich snippet' that shows authorship information and byline images alongside search results. In a Google+ post, John Mueller wrote he had "observed that this information isn’t as useful to our users as we’d hoped, and can even distract from those results".

Google began rolling out an 'improved' Panda algorithm in late September, which was quickly dubbed 'Panda 4.1'. Google UK's Pierre Far said the firm had listened to feedback to "identify low-quality content more precisely”. He also said that a “greater diversity of high-quality small- and medium-sizes sites” should rank better.

The first Google Penguin update of 2014 hit late in the year. The linkspam-fighting Penguin 3.0 would, according to Google's Pierre Far, affect fewer than one per cent of US English search queries. Only four days later, Google launched Pirate 2.0, an update designed to tackle digital media piracy.

After months of testing, Google launched 'Mobile-Friendly' labels in mobile search results, flagging sites that provide a good user experience to mobile device users. The search giant also confirmed rumours that it was “experimenting with using the mobile-friendly criteria as a ranking signal”.

December – No rest for Penguin updates

When Penguin 3.0 launched in October, Google's Pierre Far said the update would see a "slow worldwide rollout" that would take weeks to complete. However, by December, SEOs were still noticing ranking fluctuations. Google then confirmed that it had switched from scheduled updates to continuous - and potentially never-ending - Penguin updates.