Are social networks abusing privacy too much for their own ends?

There does seem to be a constant erosion of privacy by social networks, and the announcement this week that Google's latest privacy changes will use data across the entire product set is already subject to criticism. LinkedIn introduced social ads last summer which had a default opt-out setting for your name and photo to be used publicly in advertising on the network. Facebook has caused untold furores with its many privacy changes and this week is 'forcing' users to adopt the new Timeline.

The need to monetise social networks and apps and services is of course standard business practice. However, the consumer created content which leads to the growth and potential of services such as Facebook, LinkedIn, Youtube etc should not come as cheaply as it does to the network. The harvesting and use of personal details in order to attract advertisers is the payment that the users have to make in order to generate the profits for the network. This is not on a commission or affiliate level, but is 'gifted' freely to the network to do with as they choose. However, the depths to which some social networks seem willing to go in order to maximise this "free" content seems to increase rather than decrease over time. It is this seemingly never ending of the pushing of the limits of privacy decency with little respect for opt-in, permissions, or even the awareness of the users, that is worrying privacy advocates.

Despite protestations to the contrary, there would seem to be a casual yet ruthless attitude towards users' privacy, mainly due to the cut throat market the networks are in. Facebook has been forced to add the strapline - it's free and it always will be - after unfounded rumours that users would be charged to use the social site, leaving Facebook with one less route to capitalising on their enormous user base. (Friends Reunited, for instance, made its money by charging a nominal £4-5 per annum to access additional data on friends such as email addresses). However, the continuous drip drip introduction of default settings that require action by the user, rather than opt in, is telling about the attitudes which prevail amongst the internet giants. 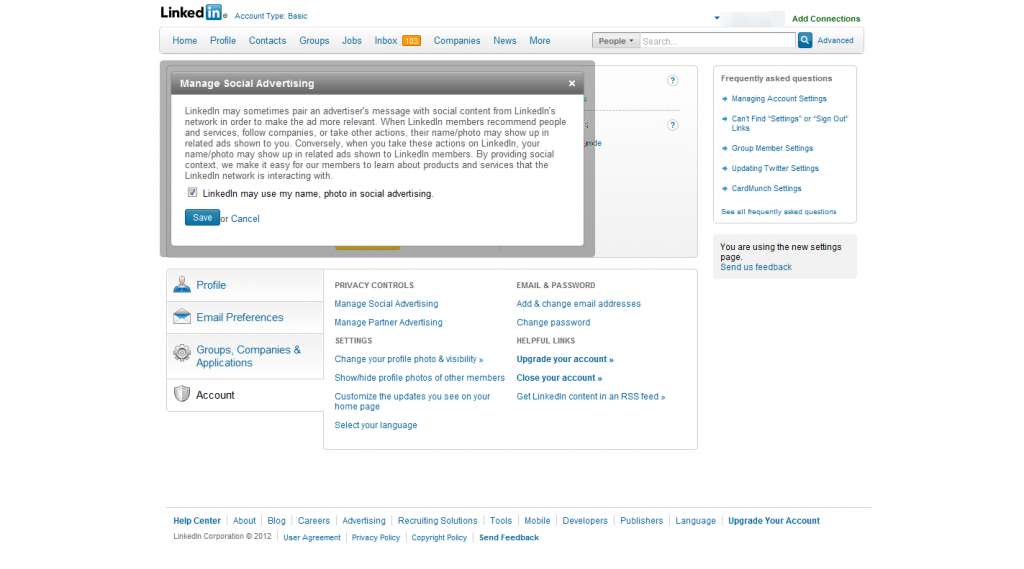 LinkedIn require you to opt out from having your name and photo used on advertising across the site. Although this was introduced last summer, it is likely that a vast proportion of the users of LinkedIn remain unaware of the change. For many, the account and privacy settings on Facebook are simply too complex to work out what is being shown to whom. Google+ endeavoured to address these concerns by allowing you to choose precisely the people with whom you shared content, but the inclusion of Google+ posts in top search results, as well as the latest privacy changes across all of Google's real estate, may have unravelled that feelgood strategy.

There have been users leaving the social networks in protest, but for many the privacy issue, or rather the possible results of such policies, is still unclear - what harm does it do me? Meanwhile, there are a number of start ups looking to create privacy enhanced and open source social networks, but the real benefit of social networks is when *everyone* you know is on them and a start up with limited members will struggle to compete with the phenomenal global user base that is Facebook today. (By the end of 2012, it is estimated that more than a billion people will be using Facebook).

How do you feel about the social networks use of your personal data? Would you leave a social network because of its privacy policy? What changes would be one step too far for you to stay?