Last month Google Webmaster Tools released a tool that shows where Googlebot is blocked from accessing certain resources. Don’t know where to start? Follow me…

What is the Blocked Resources Report?

Blocked Resources is a new report within Google Webmaster Tools, released on 11 March. Working hand-in-hand with this is the Fetch and Render tool, which was updated at the same time.

Ensuring Googlebot can access external resources is especially important right now. This is because blocking resources can affect the way Googlebot ‘sees’ a page, which factors into Google’s decision whether or not to award a site with a ‘Mobile Friendly’ label in mobile search results.

When Google’s mobile-friendly algorithm launches later this month, sites with a Mobile Friendly label could see a ranking boost.

[For more information on the upcoming changes in mobile search, download your free eBook: The Ultimate Guide to Google’s Mobile-Friendly Algorithm.]

How to Use the Blocked Resources Report

Head on over to Webmaster Tools and under ‘Google Index’ you will find Blocked Resources. Inside here you will see a list of folders labelled by external host URLs. Within each folder the tool shows which pages contain blocked resources, and more specifically the URLs the resources are hosted on. Click through these folders and you’ll see a light box appear, providing an easy-to-read summary with the important links and steps you need. 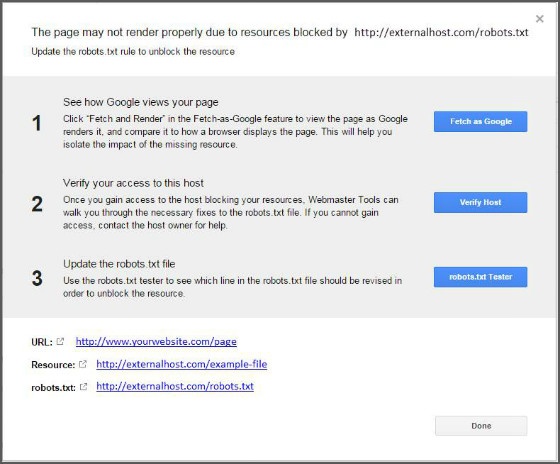 The screenshot is from Webmaster Tools and has been edited to remove the URLs. I’ve replaced them with example URLs instead.

How to Use the Fetch and Render Tool

The new Fetch and Render update allows us to view how Googlebot sees a page compared to how a user sees a page. Using this in conjunction with Blocked Resources means we can diagnose issues that may prevent a page from being ‘mobile-friendly’.

By placing the affected page’s URL in the Fetch and Render tool we are presented with two versions of the page, as scrollable images. This allows us to easily compare both versions, with a handy list of the blocked resources for that page listed below the images. If the differences are notable and make a big impact to how Googlebot sees the page, the resource(s) will need to be unblocked by the host’s robots.txt.

How to Resolve Blocked Resources

Resolving any blocked resources can be done by either of two methods:

So explore the new tools and make sure Googlebot can see those important resources. Your site will thank you for it!