Google is putting further emphasis on journalists and the media with the recent launch of its News Lab – a new tool offering short tutorials to journalists and other newsroom staff on how to use Google’s many elements – Maps, YouTube, Fusion Tables, Earth, Search and more – to add colour and meaning to a story.

“In the past decade, better technology and an open Internet have led to a revolution in how news is created, distributed, and consumed. That’s why we’ve created the News Lab, a new effort at Google to empower innovation at the intersection of technology and media,” said Steve Grove, director, News Lab, in a blog post.

“Our mission is to collaborate with journalists and entrepreneurs to help build the future of media. And we’re tackling this in three ways: though ensuring our tools are made available to journalists around the world (and that newsrooms know how to use them); by getting helpful Google data sets in the hands of journalists everywhere; and through programs designed to build on some of the biggest opportunities that exist in the media industry today,” he added. 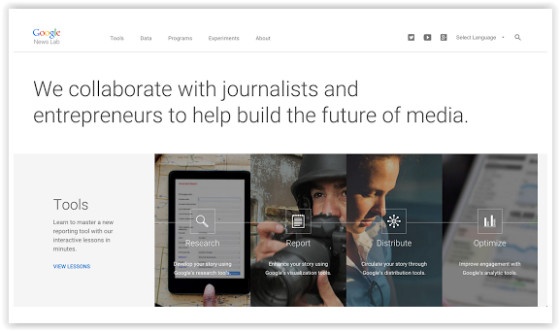 The News Lab offers short written and video tutorials on Google’s many products and how these can be used in reporting and storytelling.

The News Lab is being rolled out in the US, UK, France and Germany to begin with, but will become a global effort in the near future.