Apple’s latest software update – iOS 9 – was launched today, September 17, 2015. Offering new multitasking features, a more proactive Siri, and improvements to overall device performance, battery life and security, Apple says that once you’ve downloaded it ‘You’ll wonder how you ever did without it.”

While Apple aficionados race to hit the download button, digital advertisers and paid search professionals are keeping a close eye on the update and its impact on them. Why? Well, for the first time, Apple is enabling ad blocker extensions to Safari on iOS 9.

A variety of third-party browsers with the ability to block ads for iOS have been around for a while, but now Apple has integrated the feature directly into Safari.

For the user, this will mean that websites should be decluttered, leading to quicker load times, reduced mobile data usage and longer battery life.

This is not an automatic process, users have to install a content blocker App, and enable the App within the iPhone settings. We thought we would try out the process ourselves.

Zoe O’Neil, Director of Paid Search at ClickThrough, upgraded to iOS 9 as soon as it launched to see what this was all about. After upgrading she searched in The App Store for “content blocker”. Top of the list were paid for Apps ranging from £2.99 to £0.79. Free versions were available further down the listings. Both a free and paid content blocker were downloaded.

Checking the settings on Safari, only the paid for App was recognised as a content blocker. 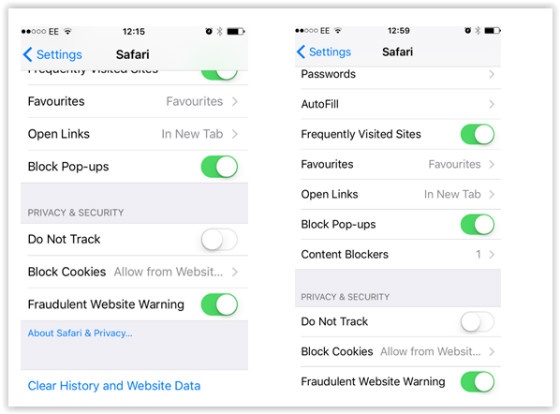 A search was performed through Google.co.uk for “red shoes” before and after the content blocker was enabled and no text or shopping ads were blocked from the results, which was an initial concern as the message from Apple has been so vague. 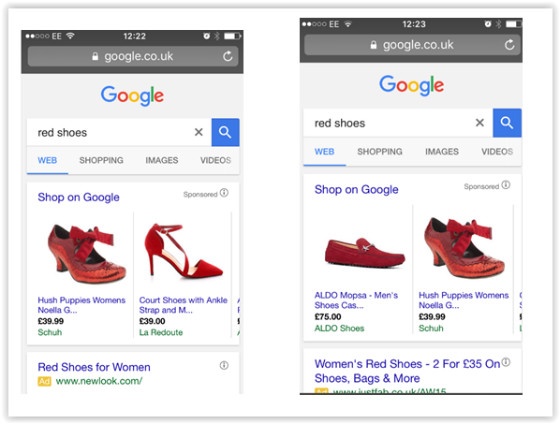 Text and Google Shopping Ads were unaffected by the blocker extension, as shown by our before (left) and after (right) screen shots

Many users might not take the action to download content blocking Apps, in which case ads in mobile will continue to show as usual. However, for those that do, it will have an effect on advertiser’s mobile paid strategy.

According to a recent study by Pagefair, 198 million people (or 1 in 20 internet users) already use ad blockers on desktop. iPhones and iPads may be largely outnumbered by Android devices, but they do represent 52%of the mobile browsing market and 14% of total web browsing, according to Pagefair.

Ad Blockers Are Not New, So What’s the Big Deal?

Ad blocking Apps already existed before the iOS 9 update, but in order to block the ads you had to browse the internet via the App so their proxy could detect and strip out scripts in the code of web pages used by browsers to pull content from ad networks. However, the iOS 9 enabled extension means that browsers can use Safari as normal once the appropriate blocker has been installed.

“There seems to be only a small number of Apps that are recognised for the content blocking extension with the iOS 9 for Safari update, and as you can see from our test you have to know which App and the setting to go to in order to enable it. My view, so far, is that this will mainly have an effect mobile Display, Remarketing and Video ads, but we will also have to monitor the effect on tracking tools such as Optimizely, Crazy Egg, Google AdWords Tracking and Google Analytics, as cookies may get blocked preventing users from being tracked,” explained ClickThrough’s Zoe O’Neil.

The content blocker extension will also prevent scripts from doing things like tracking how long a user has been looking at a webpage and monitoring how far they have scrolled down a page in order to serve up more ads.

Who knows how many Apple users will bother to download a content blocker? However, with the adoption of ad blockers on desktop being driven by young internet users - 41% of 18-29 year olds according to another recent study by Pagefair – the uptake could be rapid.

“18-29 year olds will be the ones to sit and research what this update means and once users understand the benefit they will engage on blogs and forums to promote and advise their peers,” explains Zoe O’Neil.

However, not all ads will be affected. Many ad blocker Apps already in existence operate a “white list” of adverts that are still permitted to appear, while others enable users to populate their own white list of adverts they are happy to appear.

Cunningly, Apple’s iAd service will be unaffected by ad blocker extensions, because it places adverts in apps rather than websites. Similarly, other app-based advertising platforms, such as Goggle’s AdMob, could also reap rewards.

Apple will not create its own ad blocking software. However, the big worry is that, with Apple taking the stance on enabling ad blockers, this could now open the way for other browsers and mobile providers to follow suit.

Here at ClickThrough, we will annotate in Google Analytics the date of the iOS 9 release in order to be able to analyse performance and tracking on mobile, and will keep you posted on its impact.

Want to chat more about how the new iOS 9 update could affect your ad performance. Contact our Paid Search team today.