According to Google, mobile searches now exceed desktop searches across the globe.

It was announced earlier this year that Google was seeing more search activity on mobile, however, this data was taken from only 10 countries. But Google has now confirmed that mobile counts for over half of all searches, worldwide.

That’s not to say that desktop search has decreased. In fact, quite the opposite. Desktop search has continued to increase but mobile search has soared in a world where accessing information on your phone is undoubtedly easier than booting up your desktop.

And despite the growth in app technology, overall search has remained strong with the amount of search queries growing constantly, while mobile browser usage is at an all-time high. According to recent data from comScore and an industry report by Morgan Stanley, US mobile browser audiences are twice as large as app audiences across the top 50 mobile web properties, and have grown 1.2 times faster over the past three years. 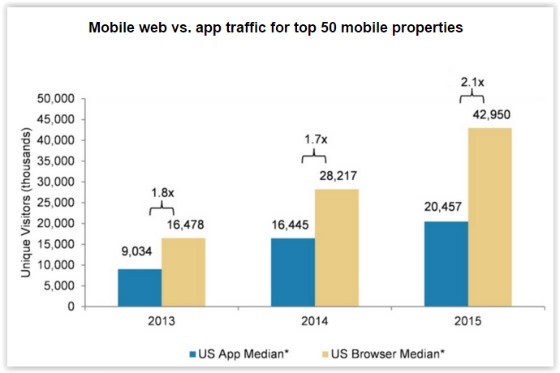 Google has also reported that their search app is becoming increasingly popular – it is now rated the fourth most popular app in America, and is growing faster than Facebook’s app. According to comScore’s recent Mobile App Report consumers are spending more time on mobile but heavily use a small amount of apps (Google Search being one of the top apps). This proves that consumers are particular about the apps they use, so currently mobile browser usage wins outright.

But now that Google has indexed 100 billion links within apps, mobiles browsing and app usage is becoming intertwined. If after conducting a search Google recognises the user has the corresponding app installed, the user will be guided to their search result within the app for a better user experience.

Mobile browsing and app usage is therefore becoming inextricably linked and will fuel brands to branch out into app usage as well as mobile friendly sites, in the hope to bridge the gap for users.