Posted in Paid search management,Google
On 17 Jun 2015
By Tom Kwei

eCommerce has never been so fun, as Tom Kwei discovers when he takes a closer look at the Groupon phenomenon of the ‘Banana Bunker’ – a case study in what conversation can do for conversion, as well as bringing us all the latest paid search news from the past seven days

Conversation Sells: How to Answer Customer’s Questions to get a Conversion

Every wondered how to sell a banana protector? Marketing Land has fun with a look at Groupon’s sales technique when it came to its ‘banana bunker’ fruit protector. 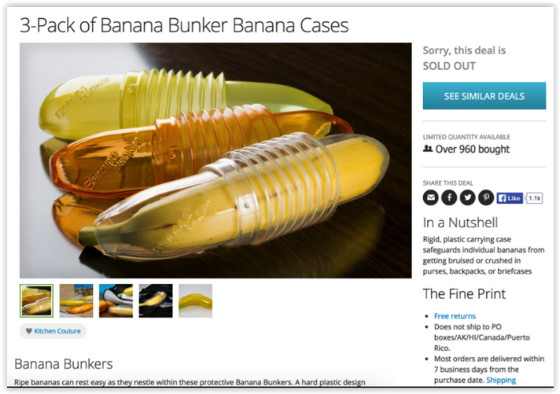 Groupon generated enough media attention and online buzz to sell out of its phallic-shaped fruit protectors in hours. Genius!

Add personality to your product by following Jeremy Smith’s tips for conversation optimisation. Get your social team involved. Embrace the story and let it run – you might just be surprised where you end up.

Google is getting ready to roll out several updates to its Google Shopping Feeds and Product Taxonomy, most of which will come into effect on September 15, 2015.

The goal of these changes is to create a richer experience for customers searching for your products online and to simplify the process of providing information in your feed.

Here are the updates for the Google Shopping Feed Specification:

Google also said that some verticals have undergone significant rework, and account holders may wish to revisit their provided Google Product Categories

Harnessing the Power of Local PPC

Garrett Mehrguth offered up his seven tips for effective local PPC via his guest blog on WordStream earlier this week. He advocates:

Three, Two, One - Go! A recent case study by Search Engine Land shows that adding AdWords’ countdown customiser to your search ads could prove an important addition to your marketing strategy. Urgency, it seems, sells.

Matt Umbro detailed an increase in CTR and conversion rates by utilising the dynamic ads. Adding a ‘sale ends in X-days’, or a voucher code that ‘expires in X-days’ really pushed results, especially for one or two days before the offer expired.

Want to learn how to find the keywords your competitors have missed? Download your FREE Pay-Per-Click marketing guide to find out more about the latest PPC developments.