Less than two months after its launch in August, Amazon has announced that Amazon Text Ads will be discontinued at the end of this month, at the same time as it disbands its Amazon Product Ads:

For many, this move is being seen as a push by Amazon to get companies to sell on Amazon.

Google Analytics has recently released a new feature to its system, Cohort Analysis. The feature allows you to segment your data into cohorts based on the following: acquisition date and view metrics (transactions/ revenue).

The report becomes more valuable when it has more custom segments layered on it. These segments can include purchasers, specific product purchasers, free trial downloaders or paid traffic.

Cohorts can be used to compare users who share a common characteristic, helping you identify trends in user behaviour, with heat mapping making the data generated even easier to digest.

According to Kim, Google is now converting text ads to what it calls “Richer Text” image ads. How this works is that the ad type runs on text + image and image only inventory. It pairs a logo from Google+ to the ad layout to add to the branding value. Publishers have no control over the colour palette, although Google says it chooses a primary and secondary colour from the logo used by advertisers.

At present, Google holds all control over who gets a Richer Text Ad, when and how they look, but manual controls have been mooted for the future.

Bing Ads will start to serve keyword-targeted adverts on mobile and tablet searches on Gumtree.com, following a syndication deal with the UK classified’s site. Gumtree is part of the eBay classifieds group.

Bing Ads has also entered into a search advertising syndication deal with adMarketplace in the US, which will enable it to serve ads in the internal search results pages of adMarketplace’s publisher sites and apps, including Men’s Health, Women’s Health, Runners’ World and Prevention.

The two deals follow on from partnerships with Infospace and Savoo, announced earlier this year.

Bing Ads is changing its reporting structure and is calling for early testers to trial the new system.

Bing Ads has had performance reporting by segments for a long time, the features include: device type, network, time of day and more. Until now to get the report insight you had to search through the ‘Reports Tab’, but that is now changing.

A new ‘Segment Tab’ in the campaign table will enable users to view performance by time, network, and device. Simply select the segment and you can view your chosen metrics. You can also download segmented data from the campaigns interface.

Bing will be trialling this between now and the end of the year.

Facebook has rolled out its lead ads feature to advertisers everywhere, following a test on the service earlier this year.

Lead ads enable people to sign-up to receive information from businesses, such as newsletters, quotes and offers, in a quick and privacy-safe way.

When a Facebook user clicks on a lead ad a form opens automatically populated with the user’s contact details, based on the information they have already shared with Facebook, such as name and email address. This makes form filling as fast as two taps: one to open and one to submit.

Facebook recommends advertisers work with one of its recommended integrated marketing platforms, such as Marketo, to then manage lead information. 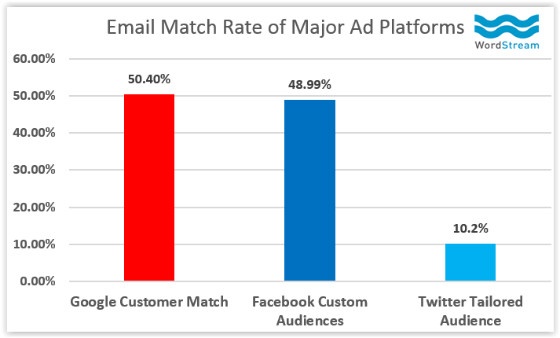 In a nutshell, the new AdWords customer match targeting option enables advertisers to target more efficiently and underlines the importance of identity-based marketing.

Learn how to stay competitive and relevant with regular AdWords Audits. Download your FREE Best-Practice Guide to AdWords Audits and discover our 22-step process for structuring an account.