Google has warned site owners that as of 10 January 2017, websites that feature “intrusive interstitials” will be penalised, likely causing them to rank lower in the search results.

An example image of intrusive interstitials was released by Google. 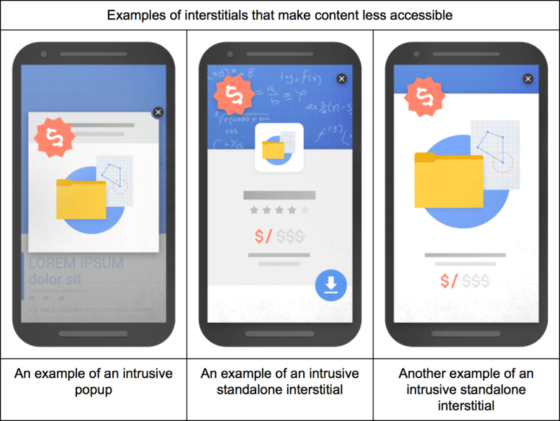 An intrusive interstitial is an advert that opens up while a page is loading, blocking the users view of the pages main content. Meaning the user cannot view the site until the ad is manually removed.

Read our full coverage to learn all about the upcoming advert ban.

Two years ago, Google added a mobile friendly tag to search results, showing users which pages are optimised for mobile. This update was closely followed by a huge mobile-friendly algorithm change that led the majority of site owners to optimise for mobile.

Here is an example of what the mobile friendly tag looked like:

In the official Webmaster Google blog, Google said that 85% of all pages in mobile search results are now mobile friendly, and therefore announced that the mobile-friendly tag will be removed from the search results.

According to Google, not only is it now not needed, but removing the mobile friendly tag will work towards creating a simplified mobile search results page.

Google has updated its local business review guidelines around when you can and can’t use schema markup on the reviews.

A list of new guidelines brought into place by Google as part of this update can be seen in Mike Blumenthal’s report.

It is now a requirement to allow users to post positive as well as negative reviews, rather than holding back negative feedback and only showing positive reviews.

The idea of the live coverage carousel is to allow Google to surface content quicker than it currently can. It’s designed to allow users to find live content about events such as “sports, elections, and breaking news as soon as it’s available on your site.”

The new feature is currently open to publishers as a pilot feature, and there are some certain requirements that must be followed by publishers in order for them to take part.

A list of requirements, as well as more information on the feature, can be found at the official Google Developers blog.

Find out how you could improve your website's rankings with a Technical SEO Audit from our team of experts.