Google: Penguin 4.0 Roll Out Is Complete

Google’s latest Penguin algorithm update has finished rolling out worldwide. The roll-out of the update began on 23 September 2016 and less than a month later, on 13 October, the roll-out was complete.

This means that anyone who was hit with a penalty by any of the Penguin updates, from 1.0 through to 4.0, should see a recovery if they’ve cleaned up their site to comply with Google’s guidelines.

The news was announced by Google’s Gary Illyes on Twitter. 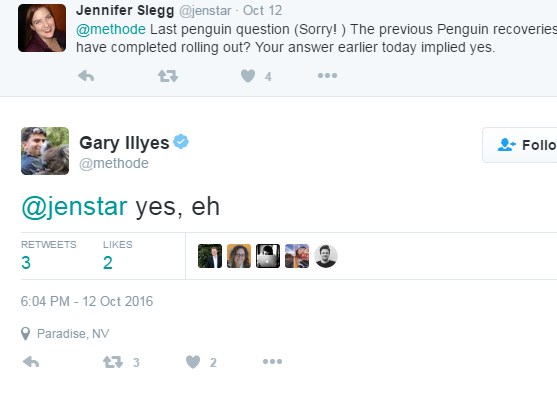 Penguin focuses primarily on web spam & link spam, so if your site is suffering because of the Penguin algorithm, auditing your backlink profile may help your site’s organic visibility.

Google’s Penguin algorithm is referred to as a ‘web spam’ algorithm, however most SEOs and webmasters focus on links, and making sure their sites don’t have spammy links.

Google’s Gary Illyes said in a Marketing Land podcast that webmasters are focusing on the right thing, and making sure that your links are high-quality is the Penguin algorithm’s main focus. He also made a point to add that the source of the link is important to take into account, meaning you should have links from quality sources, rather than low-quality sites.

For a transcript of the podcast, visit Search Engine Land.

On 18 October 2007, Google launched a feature for the Search Console that allowed users to tell Google they don’t want to see a certain URL in the featured sitelinks section of SERPs. The feature was called ‘sitelinks demotion’.

Almost nine years later, on 13 October 2016, Google announced that the tool will be removed from the Search Console – to “simplify things.”

“Our algorithms have gotten much better at finding, creating and showing relevant sitelinks, and so we feel it’s time to simplify things.”

Google to Divide Its Search Index

Google has announced that it will be dividing its search index and separating it into two – a desktop index, and a mobile index.

Google plans on creating a mobile search index, and making it into Google’s primary index – likely due to the huge increase in mobile search use. Talk of a mobile index has been around since 2015’s SMX East, when Google announced it was experimenting with the idea, and now it’s on its way to becoming a reality.

The news was announced in a keynote talk by Google’s Gary Illyes at Pubcon, and in a later catch-up with Search Engine Land, he said that the mobile index would be with us within months.

With separate indexes, Google could run its ranking algorithms through mobile and desktop search separately, rather than having to use the current method that extracts data from desktop content to determine the rankings of mobile sites.

Google Could Count Citations for Rankings In The Future

A citation is a reference to another web page that is not linked through, and these currently have no positive or negative effect towards rankings.

Recently however, Barry Schwartz interviewed Gary Illyes, where he confirmed that the Google UX team is looking into a way to count citations towards rankings.

With the rising popularity of Accelerated Mobile Pages, Google has released a new enhanced testing tool that allows webmasters to test the validity of their AMPs, and make sure they are running smoothly.

Google’s new AMP testing tool uses a live web search infrastructure to ‘analyse the AMP page with the real Googlebot.’ It tests the validity of the markup of your Accelerated Mobile Pages, and any structured data on the AMP page to ensure they are working well.

For valid accelerated mobile pages, Google provides a link that takes webmasters to a live preview of the page, with an option to share – designed to make it easier for webmasters to show problems to other members of their team, in turn making issues easier to resolve.

Whiteboard Friday – How to Build a Facebook Funnel That Converts

In this week’s episode of Whiteboard Friday, Ryan Stewart teaches us how to build a Facebook conversion funnel that works.

See how you can improve your sites rankings with a Technical SEO Audit from our experts.