SEO News Roundup: Is Bing Planning Its Own Mobile-Friendly Algorithm?

Here’s Tom Williams’ weekly batch of search engine optimisation news. This week, he covers the possibility of Bing launching a mobile-friendly algorithm, lots of preparations from Google for its own algorithm launch tomorrow, the French senate’s desire to learn Google’s search secrets – and more!

Google’s mobile-friendly algorithm rolls out tomorrow. And while Google has been unusually open with its intentions and actions in the lead-up to the launch, Bing has so far given few indications as to whether it plans to follow suit.

In the last week, however, Microsoft’s search engine has quietly introduced Google-style ‘mobile-friendly’ labels into its mobile search results. 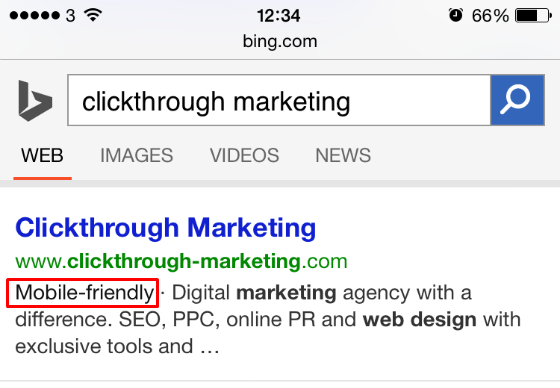 Will Bing follow Google’s lead and announce its own mobile-friendly algorithm soon? At the moment, we just don’t know – in his report on the story, Search Engine Land’s Barry Schwartz mentioned he had asked Microsoft for clarification on the labels’ significance. Since the story hasn’t been updated, we have to assume Microsoft hasn’t provided a statement.

However, Bing has left some clues that have left our swing-o-meters tilting to ‘yes’. As Schwartz pointed out, the search engine updated its mobile homepage last week, and in November, it provided a list of techniques it may use to rank mobile results.

With preparations for ‘mobilegeddon’ well under way, we’re already seeing stirrings in the direction of a more mobile-centric search. Most notably with Thursday’s announcement that Google will now recommend Android apps to mobile search users, even if they don’t have those apps installed.

Long story short: The recommendations are provided to Android phone users, for apps that have App Indexing implemented. The move will also see these promoted apps given a similar boost in search visibility to the boost already dished out to indexed app content.

For the full story, read our recent news post.

Here’s another change in preparation for ‘mobilegeddon’ – Google announced on Thursday that URLs in mobile search are to be swapped for a breadcrumb path, which will give users visibility of a result’s position in the overall structure of its parent site. 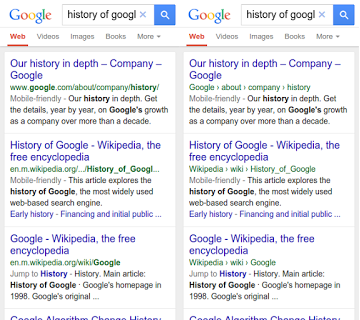 In addition to this, users in the US will begin seeing the site’s name in mobile search, rather than the domain name.

Google also announced new schema.org structured data, so webmasters can mark up their site’s name and URL structure. This will help the search engine get the information it needs to display the new URL format correctly.

Google says the change is rolling out gradually. Breadcrumbs are rolling out globally, but the site name will appear in US results only – at least for now.

Google is always testing new formats and features for search. Recently, it’s ramped up its mobile search experiments – perhaps unsurprisingly, considering all the airtime it’s given to its mobile search ambitions recently.

The most recent test sees new line breaks added to search results, after the URL. Here’s a screenshot, from Search Engine Land’s report on the experiment: 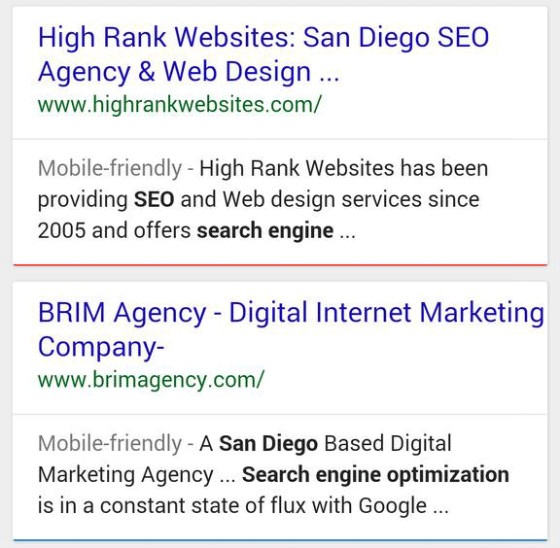 It’s worth noting that this test was spotted the day before Google announced the new breadcrumb formats in mobile search. It’s unclear if these stories are related.

Hat tip to John E Lincoln on Twitter for spotting this test.

France’s upper house of parliament last week voted in favour of a motion that would see Google and other search engines forced to reveal the inner workings of their search algorithms.

As TechCrunch reports, the motion is part of draft amendments to an economy bill, intended to prevent search engines using unfair or discriminatory techniques against rivals. If the bill passes with these amendments intact, search engines will also be required to display a minimum of three rivals on their homepages.

Google isn’t specifically singled out in the amendments, but as Google dominates the French search market, it’s clear that the big ‘G’ is the main target of the proposals.

If the bill passes, search engines that fail to comply face paying up to ten per cent of their global search revenue in fines.

Catherine Morin-Desailly, who has led the amendments, said she believed Google was keeping its algorithms secret to promote its own products ahead of competitors. She told the Financial Times (quoted by TechCrunch):

It’s a question of ensuring fairness. Too many businesses view search engines as bottlenecks. The net is tightening around [Google].

Google hasn’t had it easy in Europe recently. This French motion follows an on-going EU antitrust investigation into Google’s business practices, a resolution that proposed to unbundle Google’s search engine from other services, and the controversial ‘Right to be Forgotten’ ruling, that forces search engines to remove certain search results on request.

Bing Claims 20% of US Search Market in March

The latest comScore figures, released Wednesday, show steady but significant gains by Bing in the US search market. Microsoft’s search engine now has a 20.1% market share.

Greg Sterling at Search Engine Land pointed out that Bing and Yahoo! have now, effectively, changed positions in the US market – albeit very slowly. In Q4 2010, Bing had a market share comparable to where Yahoo! is today, whereas Yahoo! last enjoyed a 20% share in May 2009.

Google and Yahoo! have both given up a fraction of their market share for Bing to hit this milestone.

Yahoo!’s New Knowledge Graph May Not Be Knowledgeable Enough

Yahoo! has launched its own version of Google and Bing’s knowledge graph, but – as Search Engine Land points out – it’s currently a little deficient in the knowledge department.

Google and Bing have both had their own knowledge graphs in place for some time now. These are behind-the-scenes systems that store facts, and understand how these facts are connected. This allows for contextual search results to be displayed in response to users’ queries.

It may be because Yahoo!’s rivals have had more time to get their systems working properly, but at the moment, they seem to trump Yahoo!’s knowledge graph hands down.

For example, when Search Engine Land's article was written, a search for [erica schmidt] on Yahoo! brought up a knowledge graph box with facts about Google’s chairman Eric Schmidt.

The same search on Google and Bing correctly brought up information about Erica Schmidt, the author.

To be fair to Yahoo!, the same search now brings up correct results - at least on the UK version of Yahoo! search.