Tom Williams looks at the latest search engine optimisation news, including Google’s launch of the app interstitial ad penalty, Google’s testing of a split-view language interface, SEO horror stories at Halloween and a new update to Google Maps that could help you beat the traffic.

Google’s app install interstitial penalty went live on November 2, two months after Google warned us that giant ads for apps may lead to a drop in rankings.

Here’s how Google announced it:

‘Starting today, pages with an app install interstitial that hide a significant amount of content on the transition from the search result page won’t be considered mobile-friendly.’

The new penalty is built into the overall Google mobile-friendly algorithm. Webmasters hoping to avoid any ranking declines are advised to replace full-page interstitials with more user-friendly formats such as app install banners.

Abhijeet Mukherjee took to Twitter to share a split-view screen shot of Google showing him two tabs, one for English results and one for Hindi results. Here is his screen shot: 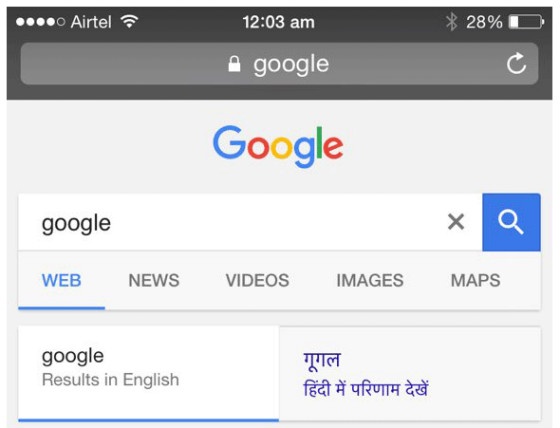 Search Engine Land tried to investigate this further. A Google spokesperson confirmed to the news site that “We’re always experimenting with the look and feel of our products but have nothing to announce.”

Jim Yu advises us to get optimising YouTube videos and other video marketing content to bolster brand recognition in his blog post on Search Engine Land.

YouTube has long been seen as the unofficial second largest search engine in the world, with billions of video views each day.

However, digital marketers are not optimising their video content and are therefore losing out on SERPs benefits.

Hiroshi Lockheimer, SVP Android, Chrome OS and Chromecast, took to the blog recently to confirm that Chrome OS is here to stay and to promote a new innovation – the Asus Chromebit – set to begin retailing before Christmas.

According to Lockheimer, the Asus Chromebit is a device “that turns any display into a computer so you can replace your old desktop with an affordable computer the size of a candy bar, or let businesses transform a billboard into a smart digital sign.”

There’s also apparently more to come from Chrome OS, with Google working on a new media player, improved performance and a continued focus on security.

Beat The Traffic With Google Maps

The latest edition of the Google Maps app will now alert drivers to upcoming congestion and accidents with spoken traffic updates, according to the Daily Mail.

The feature, which integrates with other apps such as Waze, will use date from the Highways Agency and other organisations to provide the latest traffic news.

Updates will be shown on screen, with verbal warnings on the traffic ahead. The app will also offer alternative routes to help beat the queues.

The update is available on iPhone and Android devices.

And finally, SEO had the Twitterati shaking in their boots during Halloween as the #SEOHorrorStories hashtag took off and starting trending worldwide. Started by Aleyda Solis, it wasn’t long before SEOs from around the world got in on the action, sharing some of their worst SEO-related nightmares on the social network.

The most chilling tweet of all? This one from Google’s Matt Cutts:

The hashtag was used more than 1300 times and generated between eight and 11 million impressions.