SEO News Roundup: Part Two Of Google’s Mobile-Friendly Algorithm Has Been Rolled Out

On 12 May 2016, Google released part 2 of its mobile-friendly algorithm. This was designed to give an additional ranking boost to mobile-friendly sites in mobile search results. The updated algorithm was announced by Google Webmaster Trends Analyst John Mueller on Twitter saying: “The mobile changes mentioned here are now fully rolled out.”

In March 2016, Google stated that if a user’s site is already mobile-friendly, and classed as such according to the Google algorithm, then they need not worry, as their rankings will not be affected by the update.

Google Analytics has integrated Search Console further with a new feature which offers users the ability to display Search Console metrics alongside Google Analytics metrics. The two sets of metrics appear side by side in the same report, meaning users get a better view of how their site is performing in organic search results.

The integration has added a few new capabilities, such as making it easier to find out if your organic pages have a high click-through rate and easy to view information on the different segmented platforms (mobile, desktop etc.). It also makes it easier to learn what queries are working well for organic landing pages.

Bing and Twitter are testing a partnership that allows Bing to feature Twitter snippets in the search results for some queries. A spokesperson at Microsoft announced that Bing and Twitter are officially testing the partnership and displaying Twitter results in SERPs. The first person to report on this was Ruben Gomez, when he posted a screenshot of a Twitter result in the SERPs: 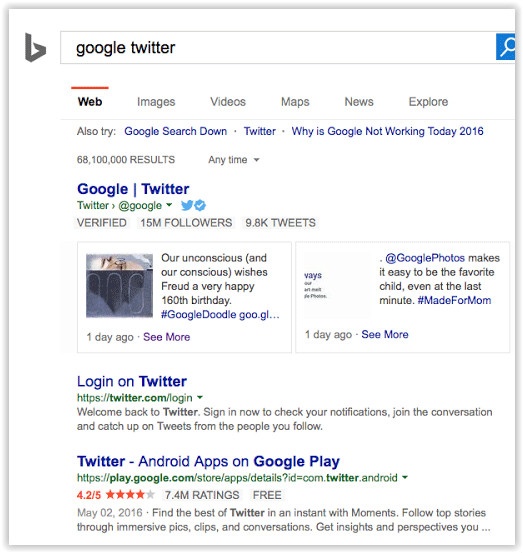 Google is in the process of testing extended titles and descriptions in search results for some queries. Currently, titles can amount to a total of 50-60 characters before they become too long to be fully visible. However, recently, titles as long as 69-71 characters have been spotted live in search results. The first to report on this was SEO Ross Hudgens, when he posted a screenshot on Twitter. Here is the screenshot:

The increase means up to 15 extra letters per title, compared with current results, depending on the characters used. SEM Post revealed that along with the increase in available characters in the titles, descriptions can now be found as long as 100 characters, with 16-20 extra characters per line.

Whiteboard Friday – How to Succeed On-Page

Is your website mobile friendly? Download your free eBook on Google’s Mobile-Friendly Algorithm to learn how to protect your SEO rankings.

Our SEO Management services have helped businesses big and small to succeed online. Find out how we could help you improve your rankings.