Posted in SEO,Social Media
On 09 Feb 2015
By Tom Williams

Another week, another batch of search engine optimisation news, with your host Tom Williams. This time round, we cover Twitter’s ‘firehose’, Google’s ‘mystery update’, Yahoo!’s success and much more… 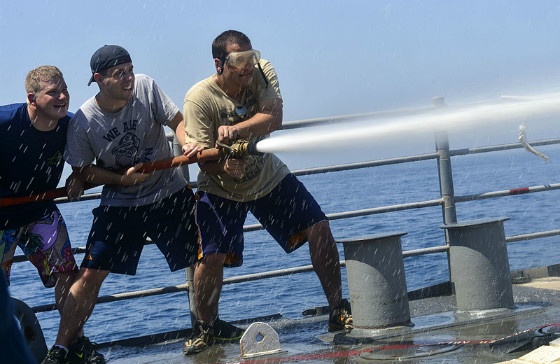 Now, in a historic deal, this ‘firehose’ will be plumbed directly into Google’s results, giving the search engine direct access to this avalanche of content, without it having to crawl tweets individually.

According to engadget, the deal was confirmed by Twitter CEO Dick Costolo at the firm’s quarterly earnings report.

This isn’t the first time Google has had direct access to Twitter’s feed. However, it’s been a while – Google’s last direct-access agreement with Twitter expired back in 2011.

But as engadget writer Richard Lawler points out, this was back when “Google was still going all-in on Google+, Twitter had expanded relationships with Bing and Yahoo!, and webOS was still kicking.”

Since Google has softened up on Google+, it seems to make sense that it would take steps to improve the visibility of social content on other platforms.

As for Twitter’s motivations, The Guardian reports that “the company hopes that the new feature will make Twitter more visible to people who don’t spend time on the site”.

The move follows efforts by Twitter to SEO its hashtag pages, which apparently resulted in a ten-fold increase in logged-out visits.

Google’s Ranking ‘Tweaks’ Have Nothing to Do With Panda, Penguin, or Rumoured Mobile Algorithm

As we reported on Friday, Google’s rankings fluctuated considerably in the middle of last week. This led some to speculate that we were witnessing a mysterious update to Panda or Penguin, or even the first hints of a much-rumoured mobile usability algorithm.

However, Google later stated that it was “continuing to make tweaks… as usual”, and there was “no specific ‘update’ to announce”.

Research by Barry Schwartz at Search Engine Land (SEL) also put paid to rumours that it may be mobile-related, as the ‘tweaks’ were “unrelated to mobile-specific sites”.

As of now, we have no indications as to what these tweaks were related to. However, we do know that the fluctuations have now died down. MozCast, a tool that helps identify Google algorithm updates by measuring ranking fluctuations by ‘temperature’, reported highs of 90° on Wednesday. This is now down to a more-normal 70°.

Yahoo! struck up a deal with Firefox in November to become the browser’s default search engine in the US. And since then, despite some hiccups, the search engine has enjoyed a steadily increasing market share.

Now, according to web analytics firm StatCounter, Yahoo! has reached a new milestone. After continuing gains in January, the ‘third search engine’ has attained its biggest US market share in more than five years. 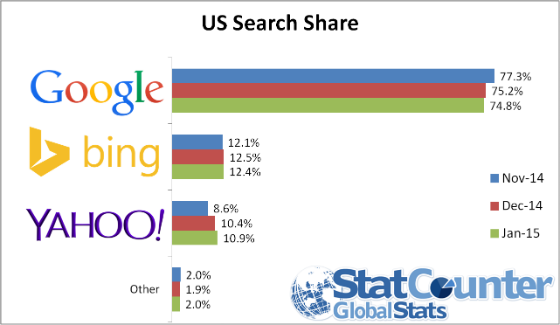 As of January, Yahoo! has 10.9% of the US search market, edging towards Bing’s share of 12.4%. Google’s market share, meanwhile, “fell below 75% in the US for the first time since StatCounter Global Stats began recording data” in 2008.

The gains, according to StatCounter, are entirely down to the Yahoo!-Firefox deal. In a separate study, the firm tracked US Firefox users’ search habits and found that usage of Yahoo! rose from 9.9% in November to 28.3% in January. Over the same period, Google usage fell from 81.9% to 63.9%. 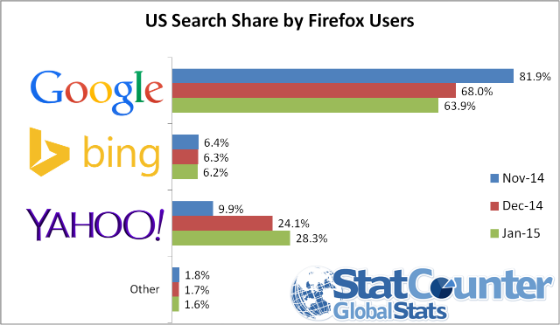 Some analysts expected Yahoo to fall in January as a result of Firefox users switching back to Google. In fact Yahoo has increased US search share by half a percentage point. It will be fascinating to see if these gains continue."

Google Answers boxes aim to give searchers accurate responses to information-seeking queries, right there and then in the SERPs (search engine results pages).

Great for users. Not so great for publishers, whose revenue depends on these users visiting their sites.

Well, SEL reported on Wednesday that certain queries are now bringing up answer boxes with ‘action links’ that point to publisher site, or carry out specific actions.

The Answers box addition was apparently first spotted by Brent Nau on Twitter, who pointed out that the box generated for the query ‘Wordpress download’ now contained a ‘Go to download’ link.

@rustybrick have you seen this? Google Knowledge Graph for wordpress download pic.twitter.com/VBzZmQQRUK

As SEL pointed out, these links were previously only appearing in Answers boxes that refer to Google’s help documentation, and these only started showing up in November 2014.

So is Google throwing publishers a bone with these new ‘action links’? It remains to be seen how widespread these links become, and it’s unclear whether they’re automatically generated or whether Google is picking and choosing whether publishers are bestowed with a link or not.

And Google is always testing new features, many of which never make it past the testing stage.

Although the just-mentioned ‘action links’ in Answers boxes may mean certain publishers see more traffic as a result of Google’s semantic search efforts, there’s another new addition to Search which is likely to be of concern to mortgage providers. 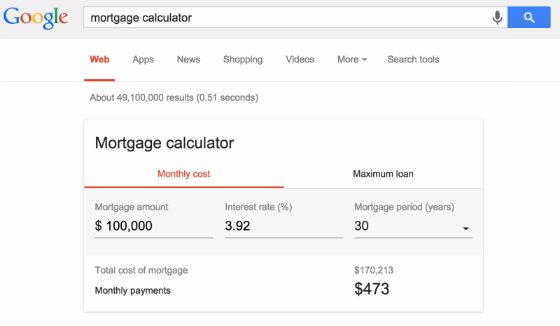 The feature, reported by SEL, is a blow for many mortgage providers, which have invested plenty of effort to get their own mortgage calculators ranking for these high-value terms.

We attempted to get the tool to display in Google UK’s results, but were presented with an ad for Google’s own mortgage comparison service.

This links to a similar mortgage calculator, but lets users directly compare rates between Google’s panel of selected mortgage providers.

Google has essentially been using the UK as a testbed for these comparison services, and as a result we see many more of these kinds of ads than US searchers – as well as mortgages, UK searchers can compare car insurance, travel insurance and savings accounts.

Google has apparently been tinkering with its App Indexing feature, as it has recently begun sending error notifications and reports to webmasters who submit their apps.

App Indexing allows Google to index the content of Android apps in a similar way to web pages. Once implemented, deep links to in-app content can appear in Google search results.

SEL reports that the error notifications began popping up in Webmaster Tools a few weeks ago. The emails tell webmasters to “fix app deep links to [URL] that don’t match the content of web pages”, and provide a link to the Crawl Errors report to help diagnose the problem. 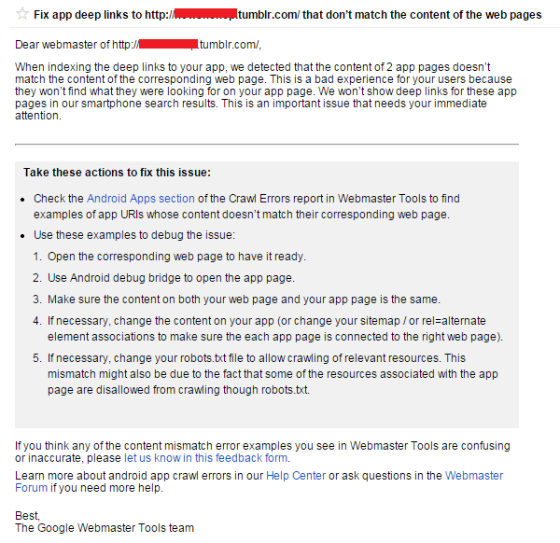 The statistics report emails apparently began to be sent on Thursday, according to Andrea Pernici, who received one of the emails and posted it on Google+. These emails contain weekly updates on clicks and impressions, broken down by day. 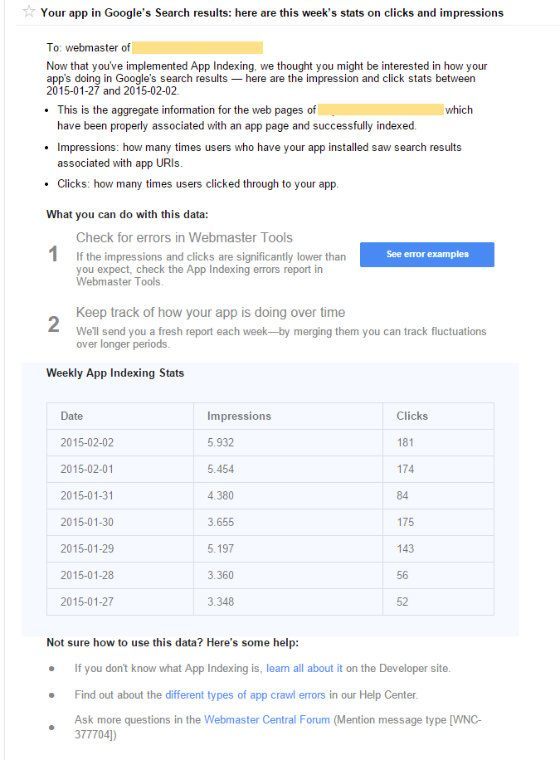 When Google’s Webmasters team asked for suggestions of “the kind of things you’d wish to see being added, improved, removed, or changed”, there was a recurring theme in many of the submissions – more clarity when it comes to algorithmic and manual penalties.

While the big G hasn’t yet implemented any of its users’ ‘dream features’ – such as an ‘automated action viewer’ which tells webmasters which algorithmic penalty they’ve been hit with – they have taken one step towards providing more clarity.

On Wednesday, the Webmasters team announced on Google+ that it has updated its Help Center article covering the oft-maligned reconsideration request process. According to the post, the article now contains “step-by-step” guidelines on submitting a request, as well as “tips on how to document your request better and how to avoid potential pitfalls”.

Hit by a Google penalty? Download your free guide to penalty identification and link removal