Google - Redirects Can be Removed After Pages Are Indexed

On 27 April, Google’s Gary Illyes said on Twitter that old redirects can be removed “if the new page is indexed.” He added that the best practice is to keep the redirect indefinitely. However, if the htaccess file is getting too big and is becoming an issue, removing the redirect after the new page is indexed (and serves as the old URL) is also fine because the link strength from the old redirects will have already been passed on to the new site. Gary also mentioned that “you will not get credited for any new links if the old page is non-existent / doesn’t redirect.”

SEO specialist, Sergey Alakov posted a screenshot on Twitter showing what is believed to be a slimmed down local box test. Searching for a local company will normally present you with a branded company box showing images, opening times, address, phone number and a few more features. However, the one shown by Sergey Alakov presents a slimmed down version, with only a few of the usual features.

Search Engine Land’s Barry Schwartz believes it could be a test purposely slimming down the local box as a way of increasing page load speed due to poor connection. Although it could just be a general UI test by Google.

Google is constantly running tests regarding user interface changes. The search engine recently ran a test in which it changed the colour of the hyperlink titles in the search results. The page titles had been spotted in a much lighter shade of blue than the usual hyperlinks. The first person to spot this was an SEO at Lindar, Phil Blackwell who posted a screenshot on Twitter showing the colour change: 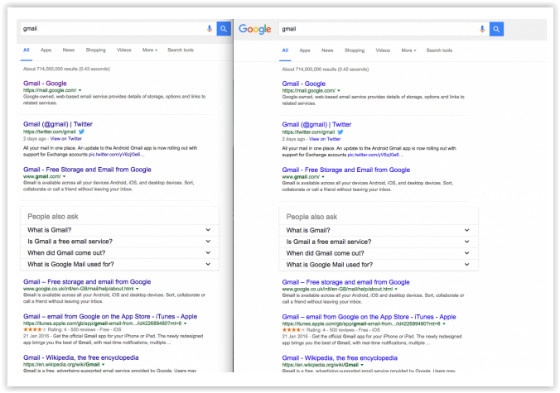 Develop your technical SEO skills and learn from the experts with our FREE eBook Technical SEO Best Practices. Download it today and discover our 15 best practice technical tips.

Learn how our SEO Management services can help your business improve its rankings and visibility.