Ranking on page one has always been the Holy Grail when it comes to SEO. However, with Google constantly experimenting with the layout of its search results, some have suggested we’ll soon be seeing far fewer than ten organic results in SERPs.  Here ClickThrough online copywriter, Martin Boonham, discusses a new study which seems to show that these good old-fashioned blue links are alive and well!

So you’ve resigned yourself to a secret compound with nothing more than a collection of classic films on VHS to entertain yourself with. Well, even with your new-found sheltered existence, news has probably still managed to reach you about the huge changes to Google over the last year.

There was this thing called Hummingbird, algorithm changes galore and a whole lot of experiments with the layouts of its SERPs.

Google’s always experimenting, and sometimes these new features mean that there are fewer than the tried-and-trusted ten organic results on the page. This is nothing new – people have been talking about the death of the big ten for ages.

But according to a new study by Conductor, people might be worrying too much about the issue. According to the study, conducted using more than 1.5 million keywords from all manner of industries and search volumes, a massive 88% of SERPs display nine or more natural search links with 73% having ten on the money. ‘What does it matter?’ you may think. Well in a world of ever-changing SERPs, the fear was Google would start pushing organic results out of the SERPs. Look no further than this much-shared Forbes piece for evidence – there certainly seem to be a few hints of anxiety in the SEO hive mind.

Things get even more interesting when you factor in the Search Engine Journal blog also referenced by the study. That blog featured an analysis of people viewing the SERPs.

Certainly, as identified by our own SEO expert Charly Wargnier who produced a blog predicting what the SERPs might look like in the future, there will be many more elements added to Google, and with so many ideas set to be brought in, or implemented already, things certainly looked a little choppy in terms of plain old fashioned organic results, or links. 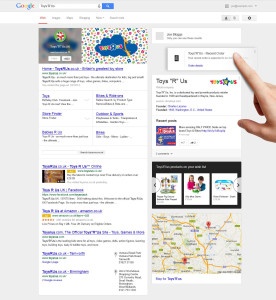 But with this study, it shows organic search is still important. What’s needed then? A rethink of how you position yourself in the SERPs, certainly – but don’t doubt the power of organic search just yet.

To wrap up, and echoing the thoughts of Nathan Safran on the Conductor blog, “take some time to explore where you are appearing in new, emerging areas of the SERPs.

“With a solid base in organic results, if you allocate some time to discover your visibility and develop a strategy to attack the weaknesses of competitors in digital results you may able to achieve a competitive advantage.”