This week, Google has provided what may be its strongest signal yet that it plans to introduce a new mobile usability ranking algorithm, whilst its executive chairman Eric Schmidt predicts that the Internet is on the road to disappearing altogether. Tom Williams dives deeper into these stories, and shares three more pieces of exciting SEO news from the last seven days…

Google has sent mass mobile usability warnings to webmasters, adding fuel to speculation that the search giant is preparing a new algorithm to tackle mobile-unfriendly websites.

The Webmaster Tools notifications, which were first noted last Monday, detail the number of pages found by Google to have “critical mobile usability errors”, and warn that “these pages will not be seen as mobile-friendly by Google Search, and will therefore be displayed and ranked appropriately for smartphone users”. 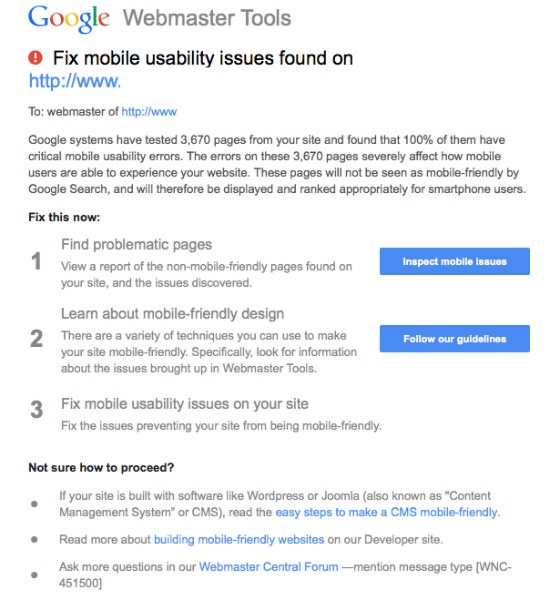 Google has already given plenty of warning that a new algorithm may be in the works. Most notably, it launched ‘mobile-friendly’ labels next to compliant sites in mobile search, and said it was “experimenting with using the mobile-friendly criteria as a ranking signal.”

The warnings seem only to have been sent to sites that have notable mobile UX (user experience) issues across the board, rather than sites that have minor issues on certain pages.

Our opinion? We reckon a new algorithm is inevitable, since Google has given plenty of warning by focussing on the subject of mobile UX in talks, statements and actions – not to mention the fact it has admitted experimenting with rankings.

For more evidence, read our news post covering this story.

Google’s Eric Schmidt reckons we’re facing a future where the Internet will have ‘disappeared’, thanks to the profileration of always-on gadgets. 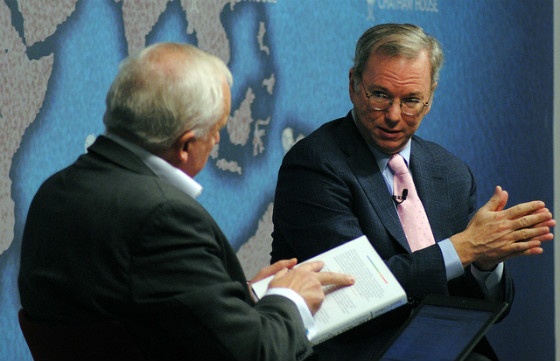 As reported by The Hollywood Reporter, Schmidt was fielding questions at the World Economic Forum in Switzerland, when he was asked for his predictions on the future of the web.

According to Schmidt, the dominance of connected devices will mean that the Internet will permeate our everyday lives to the point that we no longer notice it existing:

"Imagine you walk into a room, and the room is dynamic. And with your permission and all of that, you are interacting with the things going on in the room."

Despite his lofty ambitions for… let’s call it the Internet of Everything... Schmidt was confident the new era of the web won’t mean we’ll have to sit back and watch while robots take over our jobs. Instead, he predicted a new wave of jobs will emerge – just as people found new careers after farming became machine-led.

But what’s going to happen to Google?

Right To Be Forgotten Won’t Extend Beyond Europe, Google Says

Google has told European privacy regulators it won’t remove links flagged up in Right To Be Forgotten (RTBF) requests outside of Europe, reports Reuters. 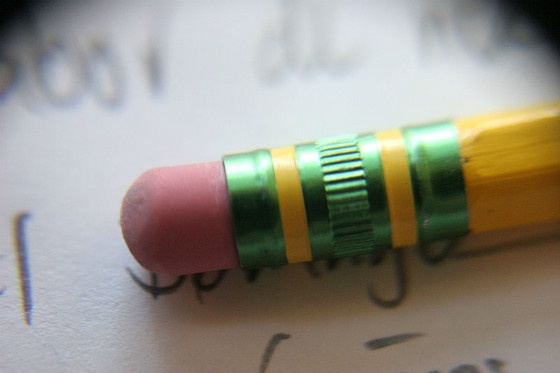 The controversial RTBF legislation, introduced in May last year, allow any individual in Europe to request removal of “inadequate, irrelevant or no longer relevant” links from Google’s European index – typically because the linked content is embarrassing or defamatory.

Google has processed tens of thousands of requests since the ruling was put into force. EU privacy watchdogs, however, have pushed the search giant to extend the link removals to its global results, as users in Europe can still access the unaffected Google.com page.

Google’s chief legal officer, David Drummond, told attendees at a Brussels event that the firm had stood by the ruling:

We've had a basic approach, we've followed it, on this question we've made removals Europe-wide but not beyond."

It's our strong view that there needs to be some way of limiting the concept, because it is a European concept."

Search sleuths have unearthed test versions of Bing’s search interface, including an expandable news card, and a layout that mirrors Google’s.

All Google Testing, a blog that shows users how to access test versions of Bing, Yahoo! and Google, published instructions to access the revamped news cards on Tuesday.

The experimental news box shows three stories, but when an arrow is clicked to expand it, two more are shown.

All Google Testing put together a video, so you can see the potential new feature in action:

The Google-aping interface test was uncovered on Thursday, days after Yahoo! was discovered to be running similar tests. Here’s the video of the Google-Bing crossover in full swing:

The White House dabbled in SEO to ensure users switched on to President Obama’s State of The Union address on Tuesday.

As Danny Sullivan at Search Engine Land reported, the White House published a story titled ‘What Time is the State of the Union?’, presumably in order to appear for relevant high-value search terms.

The US Government was, it seems, aiming to give users access to the official, White House-approved timings, as well as advertise the interactive features it introduced this year. 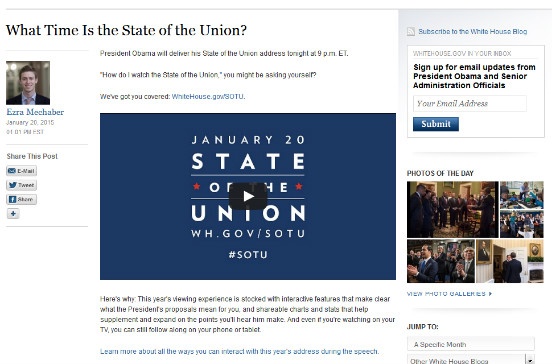 If, however, the White House was aiming to secure better viewing figures for this year’s address, then things didn’t play out like they planned. According to International Business Times, quoting data from Nielsen Media, viewership was down 1.6 million on 2014.

Download your free link auditing and removal guide, with practical tips to protect your site from Google penalties.