SEO Weekly Roundup: Google in China, Pigeon in the UK, and the End of Yahoo! Directory

In our bumper New Year SEO news roundup, Tom Williams looks at new allegations of Chinese search censorship, the launch of Pigeon in the UK, and more…

According to reports from Search Engine Land, amongst others, China may have blocked access to Google web search and Gmail over the Christmas and New Year period. And, at the time of writing, these blocks seem to remain in place.

Google’s own transparency reports appear to confirm this, with web search and Gmail both showing huge traffic drops after Christmas Day.

Search saw its worldwide audience share more than half. On December 31, Barry Schwartz at Search Engine Land reported that some users in China were being blocked from web search completely, whilst others were redirected to Google Hong Kong.

Gmail was hit harder by the blackout, with access to services appearing to be almost entirely suspended. However, some users are now reporting that they can access the services, albeit intermittently.

This appears to be confirmed by Google’s transparency report graph, which shows flickers of activity, but nothing like the levels seen before the apparent blockage.

Isthis another example of Chinese search censorship, or just a case of bad luck? The Chinese, (state-run) newspaper Global Times didn’t outright dismiss censorship as a possibility, but argued that it would only have happened because of “newly emergent security reasons”.

The problems with Gmail access this time may be caused by the China side, by Google itself or a combination of the two. But Western media pointed the finger at Chinese authorities immediately, accusing them of strengthening its cyber censorship.

"This is far too simple a hypothesis. It should be noted that Google voluntarily quit the mainland market in 2010. The issue at heart is to what extent Google is willing to obey Chinese law, on which China's attitude is steadfast."

For its part, Google said, simply: “We’ve checked and there’s nothing technically wrong on our end.”

As we wrote on December 23, Google’s Pigeon update has launched in the UK, bringing our local search results in line with those in the US.

Pigeon, which rolled out on US shores in July, aims to provide more relevant local search results to users. The update tightens distance and location ranking parameters and brings in features from standard web search.

Volatile Maps results pointing to the emergence of the update were first spotted in the UK, Canada and Australia. However, Google has now confirmed it is rolling Pigeon out to all English-speaking territories, except India (according to Search Engine Land).

For reference, here are some local search results using the old Maps search: 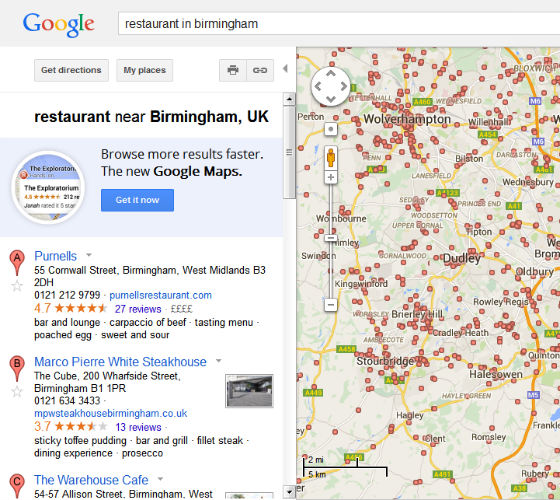 And the post-Pigeon results for the same query: 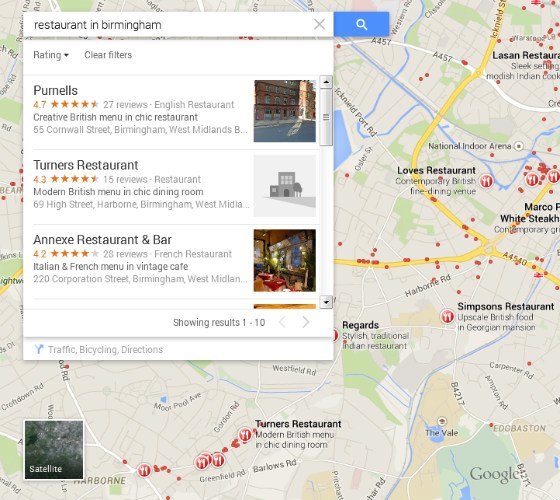 But the question remains: Is Pigeon update a local pest, or a feathered friend?

According to local SEO firm BrightLocal, 53% of local SEOs in the US reckon the update is bad for business, but 69% say it is beneficial for searchers.

Make of that what you will.

The End of an Era: Yahoo! Directory Closes Ahead of Schedule

Here’s some news that’s likely to make long-standing SEOs a bit teary-eyed: the Yahoo! Directory has finally shut down, five days ahead of schedule. 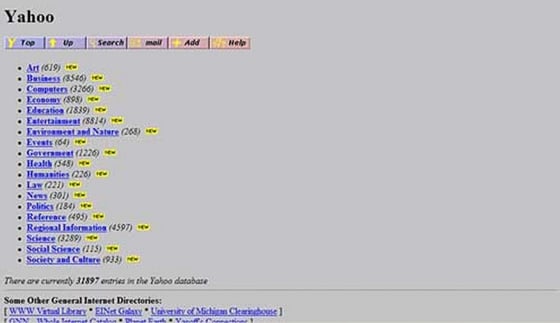 In the primitive days of the early web, the Yahoo! Directory was probably the best and easiest way to locate information online. It powered the Yahoo! Search engine, and relied on human evaluators to catalogue and rank websites in a hierarchy.

That all changed when Google launched in 1998, and showed that relevant search results were possible using automated, algorithmic search. Indeed, the results were better, and generating them took less time and human resources.

So, arguably the directory has been dead since Google launched. It has certainly been obsolete since Yahoo! replaced its directory results with Google’s own in 2002.

Yahoo! initially announced that its directory would close on December 31. However, as reported by Search Engine Land, users could no longer access directory results from at least December 27.

Instead, users were directed to a new portal called Yahoo! Small Business, which lists webpages in categories, similarly to the old directory. However, users who clicked on categories were redirected to an error page.

The links now work, so users can access listed websites. However, the listings are currently very sparse and pretty irrelevant.

Yahoo! hasn’t yet announced what it intends to do with the directory, but the name ‘Yahoo! Small Business’ at least provides some clues. Perhaps the search firm is intending to provide a ‘back-to-basics’ Yellow Pages-style listing service for local businesses?

Bing has added an AMBER Alert info box to its search results, in an effort to “help increase chances for a safe recovery of abducted children”.

AMBER Alerts, which report information on missing children, are distributed in the US via SMS, radio, television and highway signs. As Bing writes in its announcement, “search is another natural way for these alerts to be disseminated”.

Bing is working with the National Center for Missing and Exploited Children to issue the alerts.

The search engine has not mentioned whether it will be issuing similar alerts in other countries. We tried several searches from Bing UK and were unable to view any AMBER Alerts in the US, or – expectedly – any Child Rescue Alerts, the UK equivalent.

The announcement of the AMBER Alert search box follows another recent effort by Bing to safeguard children. As we reported in December, Bing is the first search engine to adopt a new web safety standard that allows webmasters to mark up content as ‘child safe’.

Google has rolled out a song lyrics answer box in its web search results, according to Search Engine Land. 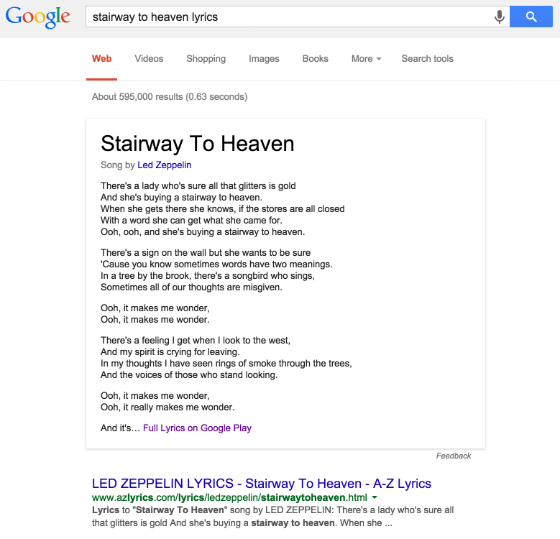 Crucially, the new answer box also includes a link to the song’s lyrics on Google Play – a clear effort by Google to make some money from the lucrative lyrics search market.

Lyrics sites have had a hard time with Google recently, with the sector being one of the biggest losers in the aftermath of the Panda 4.1 algorithm update.

This new answer box is likely to hurt business even more for these sites, and gives credence to concerns that Google’s Knowledge Graph results could end up reducing revenues for certain sectors. Google is essentially providing an official, accurate alternative to the often-incorrect and often-recycled content available on lyrics sites.

Google told Search Engine Land the update rolled out during the third week of December. It also provided the following (slightly odd) statement:

There’s a feeling you get when you turn to a song and you know that the words have two meanings. Well it’s whispered that now if you go search the tune, maybe Google will lead you to reason. Ooh, it makes you wonder…"

The update follows Bing’s decision to start showing full lyrics in search results, back in October.