It’s something that has posed a tough question for Facebook CEO Mark Zuckerberg for a while now – whether or not to introduce a ‘dislike’ button. But finally, after years of users asking for this, it seems the social media network is now working on something.

Speaking at a town hall question and answer session at Facebook HQ earlier this week, Zuckerberg announced that they were working on a ‘dislike button’ and would be rolling it out soon. What format this will appear in is unknown, as Zuckerberg has historically expressed his dislike of the dislike button idea.

We don’t want to turn Facebook into a forum where people are voting up or down on people’s posts. That doesn’t seem like the kind of community we want to create: You don’t want to go through the process of sharing some moment that was important to you in your day and have someone ‘downvote’ it.

Facebook aims to create something that enables people to express more than one sentiment about a post, to enable people to empathise on posts concerning difficult or sad issues.

Mobile advertising for apps is increasing – according to the latest quarterly report from Kenshoo. Q2 2015 saw app developers spend 293% more on Facebook ads than the same period in 2014.

The report also found that clickthrough rates fell 15% while click to install rates increased 32% and cost per install fell 12% from Q2 2014.

Conversion was reported as just less than one in three clicks for mobile app ads on Facebook turning into an install.

Nearly Half of all Video Plays Now on Mobile

Mobile is fast becoming the preferred medium for watching video downloads, with Ooyala’s Global Video Index for Q2 2015 showing that more than 44% of all video views occurred on a mobile device – up 74% on 2014 figures. Ooyala said it expects mobile to account for half of all video plays by the end of the year. 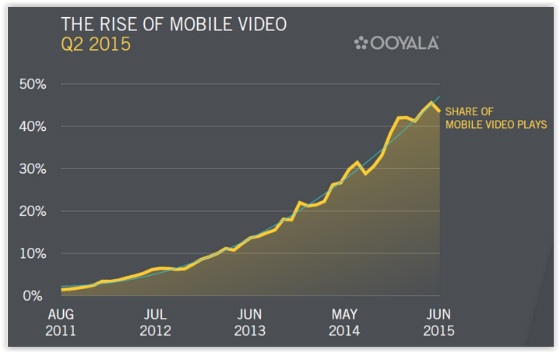 Short-form video – content with a run time of less than 10 minutes – is most often viewed on a mobile, with Smartphones representing 67% of all short-form video views.

Twitter has teamed up with Square to enable US users to make a donation direct to a US political candidate in the run up to the 2016 election.

When people have conversations about politics, they have them on Twitter. It’s what voters learn and share in these conversations that routinely motivates political action. That’s why we’re making it easier for Twitter users to actively support candidates and causes.

Candidates need to sign up for a Square Cash account before they can send out a $Cashtag to potential donors. Donors then respond to a $Cashtag tweet by selecting “contribute” to select donation amount and add in their debit card details.

Google and Twitter are working together to create an open source solution for publisher pages on mobile phones. In a move that some have said mirrors that of Facebook’s “Instant Articles” and Apple’s News app, the aim is to create a solution that instantly shows article to people who have tapped on a link in Twitter or in a Google SERP.

Struggling to create structured content marketing campaigns that improve your traffic, conversions and social influence? Download our free Editorial Calendar white paper and learn from our expert tips for B2B and B2C businesses.