What Can We Expect From Google's Hummingbird?

Search… it’s a jungle out there. Google’s algorithmic menagerie features Pandas, Penguins, and now Hummingbirds. Confused? Let Jade Coleman take you on search safari, as she explains the rationale and the results of Google’s latest algorithm rewrite.

Google has rewritten its search algorithm to celebrate its 15th anniversary. It is important to stress that this 'update', dubbed ‘Hummingbird’, is not actually an algorithm update at all, but a new algorithm rewrite that incorporates previous algorithm factors.

Hummingbird, which is believed to affect 90 per cent of searches is said to be an evolution of the June 2010 web indexing system, Caffeine. At the time, Caffeine was the largest collection of indexed web content that Google had provided. Caffeine provided results that were 50 per cent fresher than the previous index – such as news articles which we would see on the day they were released.

Although Google only announced Hummingbird earlier this week, it has been rolling out for about a month which could account for the high turbulence around 24/08, 04/09 and 12/09.

Google Hummingbird: What We Can Expect

With improvement to conversational search, Google can now answer more of our questions than ever. Not only this, but the results we see are more ‘useful’ to the search that we make.

Okay so you want a dog, you have two in mind, so you read up on them both individually. But how about comparing the two side by side? 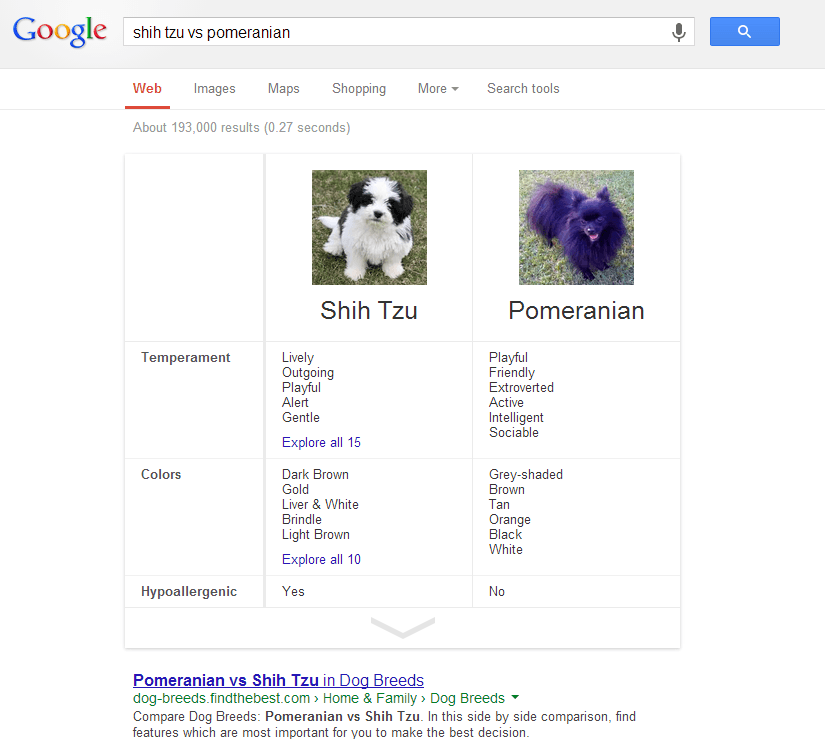 Google’s new search tool allows you to compare two topics alongside one another, so a comparison can easily be made.

Google says that over the next couple of weeks an update of their Google Search app will be available. This update will allow you to receive notifications across all devices, from desktop tablet and phone.

And if you haven’t already noticed, Google on mobile devices now shows a clearer, sleeker design, optimised for touch phones, with each search element presented separately.

The Past, the Present and the Future of Search

Did you know Google changes its search algorithm up to 500 – 600 times each year? Whilst most of these changes are relatively minor, every few months Google rolls out a ‘major’ algorithmic update that affects search results in significant ways. These algorithm changes are designed to produce search results which are more relevant to our search queries.

The best-known algorithmic updates of recent times were Panda and Penguin. Panda targeted sites with low-quality content, duplicate content and sites with a high number of ads, orphan links and 404 errors.

The aim of Penguin was to eradicate web spam, so it lowered the value of sites with high unnatural inbound links. This meant that these sites were devalued, and now appear further down the search results.

What we could also see is Google increasing its use of structured data in order to serve answers directly within the SERPs – similar to the comparative search function.

All this said, search is now more powerful than ever – we can see things and hear things within seconds, allowing us to grow our knowledge, see the most inspirational images, cook our favorite food and listen to the latest smash hit almost without effort.