In this article, I’ll be talking through the latest news updates from the world of SEO. From Google’s May 2020 core update to Search Console adding reports and tools to the SpecialAnnouncement schema - read on to learn more.

Earlier this week, Google announced on Twitter that the new core update for May 2020 is being rolled out: 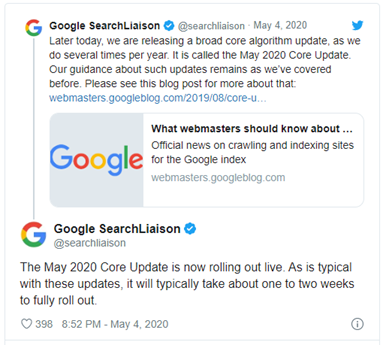 The fact that Google has announced this algorithm update indicates it will make a big change, in the same way that they announced the last core update in January. Barry Schwartz (@rustybrick) has noted that even though it’s early on, we are seeing third-party signs outside of the Google announcement of this happening (SERoundTable). In fact, there have been many unconfirmed Google updates.

Since the update, there has been a lot of SEO chatter within the various forums, with RankRanger showing significant SERP fluctuations over the last 30 days:

SEOs will now need to check their analytics to see the true impact of this update, particularly as speculation that Google may delay the update due to COVID-19 proving to be untrue.

According to a recent article by Barry Schwartz of SERoundtable, the local SEO community has been tracking a Google local update since the 23rd of April. The truth is, even over the last week, the Google local update seems as active as ever – so much so that Danny Sullivan (@dannysullivan) of Google Tweeted that he will investigate it for a possible official Google comment: 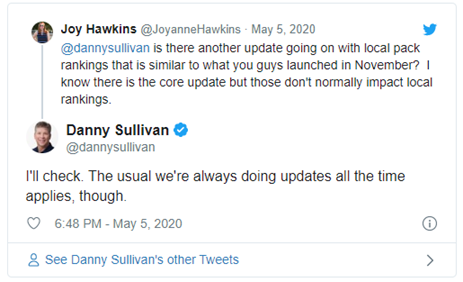 Darren Shaw of WhiteSpark published a chart showing the volatility in local search results, beginning on the 23rd of April:

While changes to local search results are seen clearly here, there has still been no official comment from Google.

Google began supporting the SpecialAnnouncements schema in early April and has already added these features to Search Console. It’s important to note, however, that this is only for government, medical and health websites.

As well as adding features to Search Console, you can now filter your performance report in search appearance to see your performance of this SpecialAnnouncements schema. This is the report: 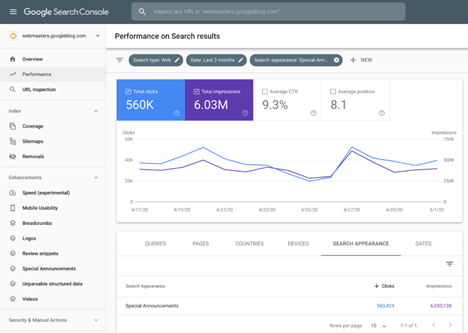 Similarly, if you have SpecialAnnouncements schema on your site and Google can detect and process it, Google may show you a new link in Search Console under Enhancements to debug this structured data. This is what the report looks like: 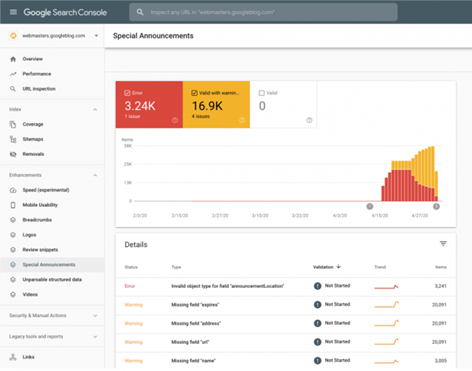 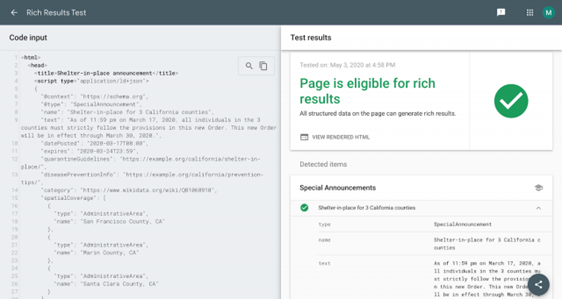 According to a recent article published by George Nguyen (@geochingu) on SearchEngineEngland, Google is now surfacing suggested search queries based on recent activity. It seems that the personalised suggestions, first reported on by Android Police, can be quite nuanced.

So, how does it work? The suggestion appears as a link below the search bar with the modifying term bolded and italicised, as seen below: 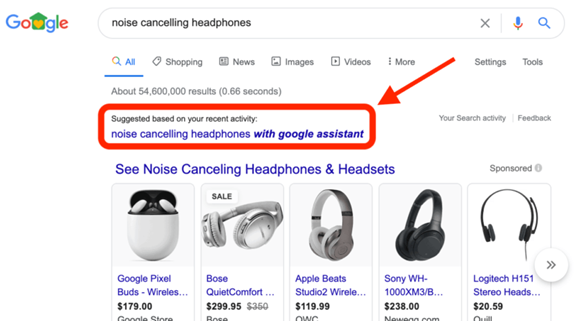 Prior to searching for “noise cancelling headphones”, Nguyen conducted a search for “google home”. Based on that history, Google suggested a query that blends the two queries with a common thread of the assistant. Here’s what the scenario looked like:

Therefore, clicking on the suggestion takes the user to the search results for that query.

Why do we care? Personalised search suggestions can help users to find what they’re looking for, and even influence behaviour by showing new options that they may otherwise been unaware of. Features such as “related searches” and “people also ask” have been around for some time now, but the placement of these new search suggestions are more prominent, signaling that Google considers it to be a better suggestion (or testing user engagement).

If you have any thoughts or questions about any of the news updates in this article, get in touch with us. We’re always researching industry news and updates and would love to hear your take on the latest SEO news. You can also tweet me @tommy_iv.