Digital Marketing in the Dark Ages

Bumbling part-time historian Oliver Pyper has been trawling through the made-up history books, and has uncovered some astonishing new evidence suggesting search engine optimisation might not be the young industry we thought it was…

Before printed books became the norm, everything was recorded in huge, parchment tomes.

This animal-hide ‘paper’ was very expensive, so not a space was wasted on page.

Every single inch was a swarm of information, filled with tiny, handwritten text.

Searching through these records could take days, or even longer.

To deal with this, village officials employed monks who had been specially trained to search out key pieces of information. 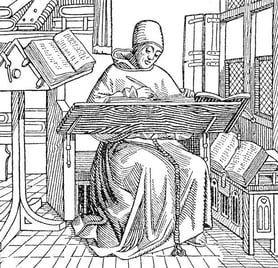 These monks were known as ‘syrch engynes’: ‘syrch’ being a corruption of Old French cerchier (to search), and ‘engyne’ referring not to a mechanical device, but to the Old French engin, meaning cleverness, or skill. They were, quite literally, the ‘skilled searchers’.

Many of the documents the syrch engynes trawled through were, in effect, a kind of middle-ages Yellow Pages.

These books would contain the names of local businessmen, along with a description of their products and services.

Visiting dignitaries would task the syrch engynes with locating a milliner, say, or a well-trained pig-servant.

Days, sometimes even months later, the syrch engyne would return with his list of results, and the local businesses contained in the list would, perhaps, benefit from a visit from this mediaeval VIP.

For arcane reasons, the number of results was strictly limited to ten.

(We do know the number ten was considered lucky, but, sadly, for reasons lost to history. Some have linked its significance to Paye Parclique, a legendary French écuyer-turned-nomad who, as legend has it, would grant wishes in return for ten pennies. However, this is only speculative.)

The business information was documented in a scattershot fashion – often, new businesses would be scrawled in whatever blank space the calligrapher could find.

It became increasingly important for local tradesmen to stand out amongst the textual flood of data – the aim was to be the very first business the syrch engyne found.

In turn, this business would then appear at the top of the syrch engyne’s handwritten list of results.

At first, many resorted to bribery, but the syrch engynes followed a strict moral code – non erit injuriosum - which translates as ‘don’t be naughty’.

A shilling slipped under the book’s binding with a nice, persuasive note was a common, but ultimately futile practice. The syrch engynes were unswayed in dedication to their code.

Historians have known about the existence of syrch engyne bettermente for at least the last century.

However, the subject was somewhat neglected, with most historians considering it to be of little importance, and most preferred to focus their efforts on apparently more pivotal historical events, like wars, plague or the construction of civilisation.

Only in the last few years have experts revisited the subject, and during their investigations they have found some astonishing links between syrch engyne bettermente and modern search engine optimisation techniques.

‘Betagging ye hedd’ is one of the earliest known syrch engyne bettermente techniques. Optimisers would highlight important points for the syrch engynes by ‘betagging’ the head of the entry with an ornate icon. This icon roughly resembled the mathematical ‘less-than’ and ‘greater-than’ symbols (< >), enclosing the letter ‘h’.

However, its resemblance to typographic symbols appears to be coincidental.

The < > symbols represent the ‘legs of Shrill Stephen’, a common figure in children’s books of the day.

The ‘h’ shape was apparently supposed to resemble a ‘tree with its prime branch verily smash’d wit’ the weightiness of a fat crow, the bird having gotten hugely rounded wit’ snacking on grains, worms and crumbs’, according to 16th Century historian Cecil the Beautiful.

And still to this day, nobody knows why.

However, rather than being artfully incorporated into on-page copy, these keywerds were designed to brazenly stand out on the page, and usually took the form of unsubtle references to a business’s prowess.

The keywerds themselves were at least twice the size of the surrounding text, and were not ‘words’ as such – more graffiti-style messages, hastily scrawled in the margins before the culprit could be caught by an official syrcher and thus face the very real prospect of being sent to 'stand in yonder corner and thinke about it (and have ye fingers chopped off)'.

Sometimes keywerds encouraged friendly competition, as businesses responded to one another's keyword choices with a volley of sportsmanlike one-upmanship.

Typical keyword choices include ‘Refyuse hatts from Alffred, for his hands be all muck-infested and ther be no wurds to do his face any favours’ and ‘Ye all be good to get greens and mete from me, for all others be pediculous and bad'.

Due to time constraints, businesses only had 156 characters in which to make their point.

As time went on, syrch engyne bettermente techniques developed an air of mystery and ritual, and secret societies sprung up to study its cryptic arts.

At first, these societies were nothing more than loosely-organised local chapters. However, the disparate groups soon coalesced into two distinct schools of thought – those who believed in using ethical techniques to influence the syrch results, and those who believed in getting quick results, without worrying too much if someone was burnt at the stake for their misdemeanours.

The groups met secretly and indulged in arcane ceremonies, whilst wearing ceremonial robes to display their allegiance to their schools of thought. 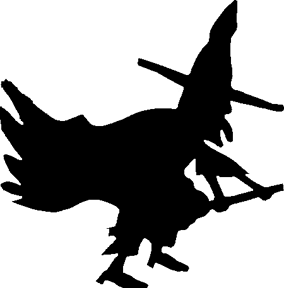 The heraldic mark of the black hatters, depicting a member of their order clutching a broom and falling over.

The ethical bunch wore flat, white caps and peasant’s robes, and were known as the ‘white hatters’.

The ne’er-do-wells wore black robes and black pointy hats, carried broomsticks, and hung around with frogs and cats. This feared group was known as the ‘black hatters’.

It has been suggested that the modern image of witches may derive from the appearance of the black hatters, but there is no evidence of them having annoying, high-pitched laughs or being particularly prone to boils.

Syrch engynes and their libraries of information were initially the only sources from which people could access business records.

However, recognising that the monks were quietly running a fierce monopoly, some intrepid entrepreneurs began their own data repositories.

These new data sources became known as ‘blagges’, and their owners were called ‘blaggers’.

Whilst syrch engynes were very ‘to-the-point’ when detailing the information they’d found, blaggers would allow themselves a great deal more in the way of artistic licence.

As blaggers let their artistic ambitions get the better of them, business-focussed blagges became the minority. Within a matter of years, blagges had sprung up covering all manner of subjects, including the fashion habits of royalty, recipes, and pig-rearing techniques.

The art of syrch engyne bettermente has many echoes in digital marketing today. Techniques like keywerds and betagging ye hedd are closely related to modern search engine optimisation techniques like keywords and heading tags.

But the syrch engynes, the black hatters and the white hatters could never have imagined their art would be practiced on such a huge scale.

Their work was limited to a relatively modest collection of documents in local libraries, because it wasn’t practical, or necessary, to travel further afield to find essential services.

But today, the thirst for information is so strong that thousands upon thousands of people scour search engines every day for products, services and pictures of cats.

The local roots that the syrch engynes laid down have grown into an astonishingly interconnected global network.

I like to think they would be proud if they could see the fruits of their labours.

And maybe, just maybe, we could learn a thing or two from these marketers of yore.