Google appears to be testing a new version of its Analytics homepage, featuring a cleaner, modern look and new messaging.

The new version includes increased use of white space, larger fonts and a revised, mobile-friendly layout. 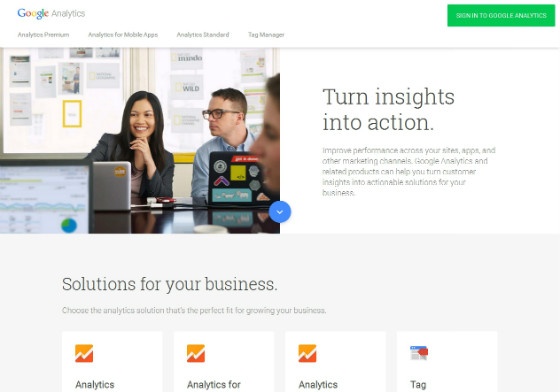 The revised layout seems to be an attempt by Google to conversion-optimise the page, with clearer messaging and bold, obvious calls to action - for example, the plain "Sign in or create an account" text from the current homepage has been replaced with a big, green 'Sign in to Google Analytics' button.

The button is now part of a floating menu that follows the user as they scroll.

There's also a new case study quote, from Mia Vallo at National Geographic. The quote is highlighted more clearly than before.

In terms of messaging, Google seems keen to appeal to Analytics beginners, with simplified above-the-fold copy focussing on key benefits and taglines. The case study quote, which is very much the visual focus of the page in the current version, is moved halfway down the page in the test version.

"The test version is a notable improvement from a conversion point of view. They've clearly thought long and hard about this.

"The page is divided into much clearer sections to allow users to more easily absorb the information at a faster rate. This gets the value proposition across more quickly, which should aid conversion rates.

"The headline stands out much more clearly using black on white, and there's enough white space around it to make it stand out from its surroundings. The call-to-action sign in is much clearer, and its colour is different to any other on the page. And by making it green, they promote emotional associations of well-being, success and progress.

"The only element missing, as far as I'm concerned, is a call to action to 'Try it now', or similar, in the hero area."

Here's the new homepage in full:

SEO Specialist, Zoe Clulow, heads up the latest news in the world of search engine optimisation, from an increased demand for SEO to Tiger King Joe...