Posted in International Marketing
On 18 Mar 2022
By Andrea Diaz

In this week's International Marketing News, we're taking a look at investigations into Google and Meta, Ireland's post-Brexit international commerce scenario, and news about shoppers in the Netherlands and trends in China.

Google and Meta to be Investigated Due To Anti-Trust Violations

According to The Verge, antitrust regulators in the EU and UK are looking into Google and Meta's 2018 "Jedi Blue" deal, which allegedly gave Meta preferential access to Google's ad bidding system and was used to block ad tech rivals.

The Jedi Blue deal was first brought to light when the state of Texas sued Google's ad business, an effort in which 15 state attorneys general have now joined. But what is Jedi Blue, and why are regulators looking into it?

In 2017, Meta (then Facebook) was planning to build its own ad tech system to compete with Google's—that is, until Google allegedly reached across the aisle and offered Facebook better rates and access to its

ad bidding service in exchange for not building a competing product. Over the course of the agreement, Google would receive hundreds of millions of dollars from Facebook, and Facebook could save billions of dollars that would have gone to its ad tech rival.

According to The Intelligencer, court filings show that both firms were well aware of the deal's possible political ramifications, which might violate the Sherman Act and other anti-monopoly statutes.

In fact, the contract stipulated that the corporations must reply to and notify each other of any government correspondence related to the deal. 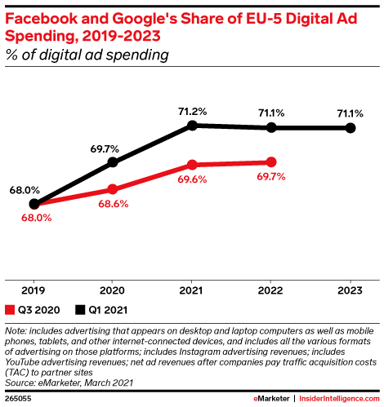 The EU has been at the forefront of a global wave of regulation and fines aimed at Big Tech companies, with search and ad technologies.

Google, in particular, has had a hard time. There have been so many fines that it's difficult to keep track of them all.

Google alone paid the EU $5 billion for anti-competitive bundling in 2018, $1.7 billion for display ad tactics in 2019, and just lost an appeal to overturn a $2.8 billion punishment

from 2017 alleging it prioritized its shopping business in search results. To add insult to injury, Google is also being sued for $2.5 billion by a Swedish corporation for similar conduct.

Meta has also struggled, with fines and the forced sale of Giphy, which it bought for $400 million in 2020.

The relationship between internet behemoths and EU regulators has deteriorated to the point where Meta has threatened to withdraw its core apps from the continent.

St Patrick's Day is a major celebration for Irish people all over the world, as well as an opportunity to bang the bodhran for Irish trade.

According to a study of the changing character of Irish trade, the country's rapid expansion since the 1990s has been built on persistent export growth,

which has largely coincided with the country's great success in recruiting, but relying on, foreign direct investment.

Once primarily an agrarian society, the Republic of Ireland is now a sophisticated knowledge economy focused on services in technology, life sciences, and financial services.

Foreign-owned multinational corporations account for a sizable portion of Ireland's GDP, with 14 of the top 20 firms in the country being foreign-owned.

According to the report The Changing Nature of Irish Exports, services have become increasingly important to the Irish economy since 2010, accounting for roughly half of total Irish exports by 2012.

According to the Irish statistics office, the CSO, Ireland exported £152 billion in goods and imported £91 billion in 2019.

Europe (€79 billion), the United States (€47 billion), and Asia (€17.4 billion) were the top three export markets. The UK was the second-largest single export market at the time, accounting for €15.7 billion.

According to CSO data, seasonally adjusted goods exports increased by €2.2 billion (+16 percent) to €15.5 billion in January 2022 compared to December 2021. The figures for January increased by €3.1 billion year on year.

Trade between the Republic of Ireland and Northern Ireland has "rocketed" in the post-Brexit environment, according to the Guardian, with both regions benefiting from remaining in the EU Customs Union.

In a May 2021 piece headed "How the Irish Republic is Making the Best of Brexit," The Economist praised the Republic's realistic approach to Brexit.

Micheál Martin, the Taoiseach (prime minister), was in London this week to kick off Enterprise Ireland's global St Patrick's Day celebrations. Enterprise Ireland is a government-run organization tasked with increasing Irish exports around the world.

Ministers on both sides of the Atlantic emphasized the importance of IT businesses to the Irish economy, with Minister Michael McGrath meeting with US tech giants like as Google, Apple, and Meta at the California offices of investment agency IDA Ireland, according to the tweet.

M-Commerce Favoured By 34% of Dutch Shoppers

More than a third of Dutch shoppers prefer to shop while on their mobile phone.

Consumers don't just use their smartphones for internet shopping: they also use them to research products before going into stores.

According to Klarna's recently released Mobile Shopping Report, m-commerce is growing in popularity.

Over 13.000 people from 13 different nations were polled regarding their mobile buying habits. Between Q2 and Q4 of 2021,

the Netherlands' preference for smartphones as a shopping device climbed significantly from 28% to 34%.

The preference for desktops and laptops, on the other hand, fell from 60% to 52% during the same time period.

When comparing different age groups, it appears that millennials are the most active mobile shoppers.

At least 48% of them prefer to shop on their smartphones, followed by 43% of Gen Z shoppers.

The phenomenon of webrooming is another notable finding in the report. Online shoppers frequently compare prices for products in competing online stores, but the report claims that shoppers in brick-and-mortar stores do the same.

Only 12% of Dutch consumers do not conduct any online research before purchasing clothing or shoes in physical stores.

This percentage is 14% for electronics and 20% for beauty products.

Today's internet purchasing experience is frequently a very well operation. Consumers are disappointed when e-commerce websites take more than a few seconds to load or things take more than a day to arrive, demonstrating how well-oiled the fulfilment machine has become.

Online shopping, on the other hand, has never been able to nail the leisure side of retail until recently. You may argue that this wasn't a problem before the pandemic because shoppers could get the best of both worlds. Order groceries online or go shopping with pals for food and fashion.

However, the shutdown emphasized how harsh and, yes, unpleasant online purchasing for discretionary products can be.

Social shopping, as opposed to simply buying stuff on social media (though that is a part of it), is about bringing that shared experience, advice, chat, and entertainment into the digital realm - making retail 'phygital.' This entails taking the greatest aspects of offline buying and bringing them online.

However, extending beyond working bots and instant messages to engaging with avatars and live streaming is also a possibility.

China has been a leader in this field for some time, with live streaming shows becoming a more popular approach to reach mobile consumers through sites like Tmall.

As a result of these trends, Chinese consumers are spending significantly more time shopping online, with the average Alibaba shopper accessing online stores nine times per day and spending an average of 27 minutes per day in shopping apps. Something else is going on because not all of this time is spent sending out credit card information.

David Lloyd, formerly of Alibaba's General Manager in the UK, Netherlands, and Nordics, says: "In China, people are researching, getting video content, watching live content, including live streamers who are celebrities in their own right, accessing content via an app rather than a browser." Because of the intersection of business and entertainment, internet shopping does not have to be a solely efficient experience."

Adding a touch of humanity to the digital experience was definitely beneficial during lockdowns. It will surely have contributed to giving the Winter Olympics a more intimate touch, as there were no public spectators owing to continued restrictions. However, once the pandemic has passed, social shopping in a virtual setting will continue to grow in popularity, becoming the true embodiment of the 'phygital' trend.

Social shopping and phygital experiences are the epitome of retail's bells and whistles in this environment. They're on the cutting edge of everything fresh and sparkling. The foundations must be meticulously maintained in order for them to work properly. This entails high-performance networked systems and data platforms.

And that brings us to the end of this week's International marketing news. If you would like Andrea and the team to support your brand's international success, then get in touch!