Posted in Google,SEO and Content
On 27 Jun 2016
By Tom Williams

Google’s Gary Illyes stated that Google’s Panda algorithm - a ranking signal aiming to lower the rank of low-quality sites, and return high-quality sites to the top of search results - still takes months to roll out after collecting scores.

Since its original release, Panda has not fundamentally changed. And it still works in the same way as it did when it was first rolled out. The Panda algorithm will crawl a site, pick up on signals and assign a Panda score to that site. After a site is scored, it will slowly be ranked accordingly over the space of a few months.

Google has recently added a rich results filter to its Search Console Search Analytics Report. The new feature is designed to allow users to filter out any form of rich results from their reports. Cutting out impressions and clicks collected specifically from rich cards, rich snippets, and any other rich results within Google SERPs. Here is an image showing the location of the new filter:

In a recent Google Hangout John Mueller announced that any links found within the link tool in Google Search Console are already indexed within Google. The announcement was made after another user in the hangout had queried whether or not links are found in Google’s index.  had asked about the subject. As Simon believed those links are not often in Google’s index.

Here is the query:

In Search Console when you look at your inbound links, you'll often see a number of pages in there that link to you that are actually in the search index. I don't know why that is and maybe some content is cached or style or whatever. But I think you said in the past, if a page isn't in the search index and even if it's in Search Console it won’t contribute to any kind of algorithmic penalty filter anything like that. Is still the case?

And here is John Mueller’s response.

I mean one aspect that could be happening there is that a page maybe has a no index on it. We know about it, we can crawl it, we can kind of pass PageRank through the links that are there but it's no indexed because there's no index or maybe it's a kind of temporarily hidden with the URL removal tool something like that. Or maybe it was hacked and is hidden from the search results because of that.

Google’s Mueller then went on to ask that anyone with examples similar to that stated by Simon should send them to him, and he will investigate the reason behind it.

Over a year ago, Google Analytics released Safe Browsing alerts to warn users about compromised sites and sites that are being used for distributing malware or phishing attacks. On 21 June 2016, Google Analytics expanded this set of alerts. Notifications about sites that have been hacked will be sent out to site owners, even alerting them of the exact domain. Google will then point you to resources and give you help on resolving the issue.

Here is a screenshot of the notification that will be sent to you if your site has been compromised by a third party: 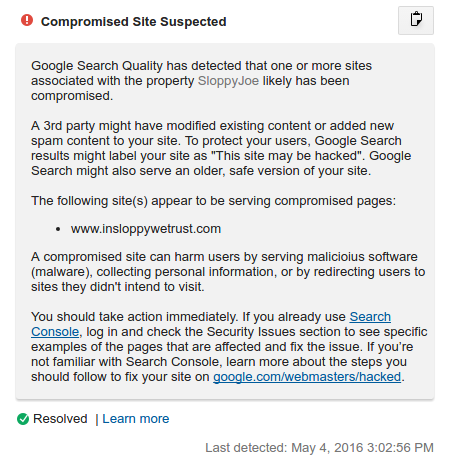 The new Google Search Console mobile usability testing tool has begun testing a new interface, so that it mirrors that of the mobile-friendly testing tool.

Screenshots posted by solo marketing consultant, Conrad O’Connell, show the Google Search Console mobile usability tool with a similar dashboard to that of Google’s mobile-friendly testing tool. The mobile usability tool was launched in October 2014, and since then has hardly been updated. The new version within Search Console shows the same data, graphs and information as the old layout and the only shown difference is the redesign of the dashboard. Here is an image of a graph in the new layout:

Currently, the new layout is in testing stage, and it is unclear whether or not the dashboard will undergo a permanent redesign, or if it will return to its original layout.

In this week’s episode of Whiteboard Friday, Rand Fishkin informs viewers of when and how to target low-volume keywords.

Want to learn more about SEO best practice? Download our free Technical SEO Best Practices eBook to learn about the best way to form your SEO strategy according to best practice guidelines.

Find out how you could improve your website rankings. Starting with a Technical SEO audit. Our team of SEO experts can provide your brand with all the support necessary to ensure your site complies with best practice SEO tech checks.