IE10: Do Not Track plans cause web browser controversy

Posted in PPC,SEO and Content
On 13 Jun 2012
By ClickThrough Marketing

Are we getting closer to the era of private search?

At the end of May, when Microsoft announced that its new browser, Internet Explorer 10 , would be pushed to market with “Do Not Track” set on by default, the search industry was a little surprised, to say the least.

The basis of Microsoft’s plan was obvious – essentially, the move was designed to pull the rug out from underneath Google.

Google relies on third-party tracking technologies for its ad networks: making IE10 default to Do Not Track meant third-party trackers would be informed that the user didn’t want to be tracked.

The networks themselves then have a moral decision to make on whether to track or not, after receiving Do Not Track instruction. Arguably, most networks would respect the user’s wishes.

So aside from ignoring the DNT command, the only way this information would be provided would be through IE10 users who specifically told their browser to allow tracking. However, the stereotypical IE user perhaps doesn’t fit the savvy Internet user mould: most fiddlers and tweakers will have picked up Chrome or Firefox and dumped IE years ago.

Those that are left are Microsoft fanboys, or people who don’t really like to fiddle with things: who are happy with Microsoft products as an industry standard. That, of course, equates to most people: IE remains the main browser of choice across the desktop platform, with a 54% share globally, followed by Firefox with 20% (according to Net Market Share).

So what is Do Not Track exactly and should advertisers be worried?

Do Not Track is an initiative borne out of the US. DNT is a policy proposal (backed by the Federal Trade Commission) and piece of technology which allows an Internet user to opt out of being tracked on the web by any third-party analytics and advertising networks.

Do Not Track is supported by IE8, IE9 and Firefox in one form or another.

For Firefox, you can find the DNT options here:

And here for IE9: 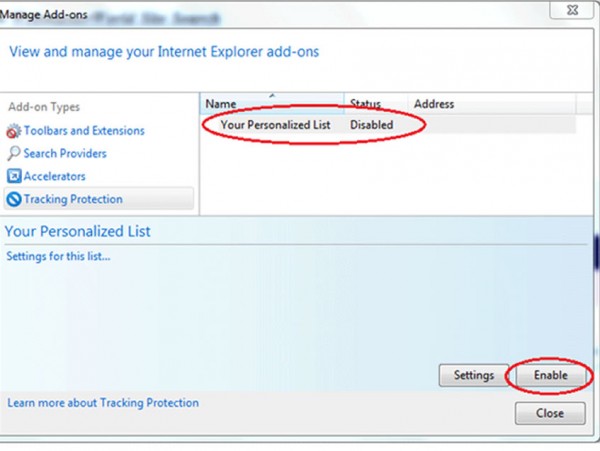 Now, here’s an interesting fact. Google’s Chrome browser doesn’t support DNT at all. Users can’t choose to opt out of third-party tracking – something vitally important for a business reliant on ad networks for income.

Even uttering its plans to default to DNT was seen as a brash move on Microsoft’s part.

It can’t happen by default

Apparently, though, this utterance was just that: a murmur. Microsoft’s plans look short lived – because the move wouldn’t comply with the Do Not Track draft proposal submitted on Wednesday, which sets out that ‘explicit consent is required for a user agent enabling the Do Not Track signal’.

If ratified, that alternation will mean Microsoft having to ditch plans to turn DNT on by default.

But it doesn’t mean that Microsoft has to abandon plans to offer a private browsing experience.  For example, they could (and probably will) make it much clearer to users on how they are tracked, and show them where to find the DNT feature - adding transparency for users of how their online behaviour is monitored.

Although plans to default to DNT may have been quickly nipped in the bud, the Do Not Track movement is definitely one to watch. It is already gaining Twitter momentum after being upheld in the Consumer Privacy Bill of Rights, introduced by the Obama administration, and enforceable by the Federal Trade Commission.

It’s important to reiterate though, that DNT does not physically block cookies used for tracking purposes - but it does signal, from the browser to the website, that the user wishes not to be tracked.  The networks currently make the choice on whether or not to respect that wish; the behavioural ad networks that have committed to this initiative can be seen on the DNTs website. This could be subject to change, and enforcement law, in the future.

How does this affect Internet marketing?

The potential impact for the online behavioural advertising industry is obvious – with no tracking information, they have no way to target customers.

But how would this affect, for example, Google Analytics or Google re-marketing?

With DNT by default some way off, the fact Google’s competitors are considering this approach should signal that Internet marketers need to keep looking for more ways to assess how visitors use their websites. The juicy tracking information third-party cookies provide may soon begin to dry up.