Posted in International Marketing
On 08 Jan 2021
By Alison Booth

Our international marketing expert, Alison Humphries, is back with another round of news stories. From the suspension of Donald Trump's social accounts to shifts in consumer spending priorities during the pandemic, read more.

What's new, important and interesting in the world of international marketing? This week we look at VAT rule challenges for EU exporters to the UK, the impacts of these changes on how Amazon sellers set their prices, social media platforms and Shopify’s decisions to suspend Trump’s activity following events on Wednesday, and how US consumers are prioritising their spend amid the pandemic.

The Institute of Export and International Trade analyse the complexities of the post-Brexit VAT rules to determine why some businesses no longer plan to supply the UK.

VAT registrations are now taking up to two months, which has driven many companies to seek to avoid this burden and stop trading with the UK. Didriksons, a Belgian beer brewer and coat manufacturer from Sweden, no longer plan to take orders from the UK.

The UK’s departure from the EU has placed HMRC under high pressure due to the need to check more than a million additional packages a day for VAT compliance. Companies following the rules are pushing for VAT loopholes to be closed to ensure competition remains fair.

FedEx and TNT now charge a higher rate for UK-EU shipments to compensate for the increased VAT admin. TNT has set a surcharge of £4.31 per shipment and DHL and UPS have followed suit.

The Institute of Export and International Trade investigate the reasons behind the rise in prices on Amazon and eBay from 1st January, as VAT paid on products on their platforms by third party sellers now needs to be deducted at the point of sale. Thousands of sellers, many of which were from China, had previously sought to avoid this through using shell companies and fake VAT numbers.

“I’ve never seen anything like this. It is pretty hard to avoid the conclusion that they were not paying any VAT before but suddenly they don’t have any choice so they’re putting up their prices.”

In a 2019 report, the Commons public accounts committee estimated that £1bn was lost to VAT fraud. Retailing bodies have called upon HMRC to tighten up rules surrounding VAT.

ADWEEK seized the opportunity to report on Shopify’s efforts to prevent all future sales of Trump merchandise through the two official store fronts “TrumpStore.com” and “Shop.DonaldJTrump.com” connected to the platform as part of their efforts to eliminate support of organisations that threaten or condone violence to further cause. Notably, bans are permanent.

Trump merchandise sold through his official storefronts were still available on Thursday through Amazon, Walmart and eBay, but these did seem to be from third party sellers. Neither platform has commented at this stage.

When Trump sought to ban TikTok during last summer, some users retaliated by abandoning their carts, hoping to waste Trump’s ad spend.

ADWEEK also updated on Facebook’s actions to lock Donald Trump’s Facebook and Instagram accounts for the remainder of his presidency following on from internal and external pressure to act against the president’s incitement of insurrection at the US capital.

Mark Zuckerberg stated that “Trump’s decision to use his platform to condone rather than condemn the actions of his supporters at the Capitol building has rightly disturbed people in the U.S. and around the world.”

Trump’s rule-breaking posts, that could provoke further violence, were removed, and the initial decision to lock his account for 24 hours was not felt to be strong enough.

Twitter also removed some divisive Tweets and locked him out of his account for 12 hours on Wednesday. Meanwhile, Snapchat locked his account indefinitely and had even taken steps during the Summer to restrict his activity by eliminating further promotion of his account on its Discover platform. YouTube removed a video he posted, but did not comment on the status of his account. Twitch has also temporarily disabled his account.

Facebook did not follow its own rules previously, by not taking any action against Trump’s threats against a peaceful Black Lives Matter protest in Minneapolis a violation of its policy, despite stronger action from Twitter, which led to Facebook’s employees feeling incensed by Trump’s posting on Wednesday.

Facebook has allowed Trump to use the platform in alignment with its rules while removing or labelling posts violating its policies, but has taken stronger action led by use of the platform “incite violent insurrection against a democratically elected government”, according to Zuckerberg.

CONSUMER SPENDING PRIORITIES HAVE SEEN A HUGE SHIFT OVER THE PANEDMIC

eMarketer clearly outline the reprioritisation of consumer spending in the US through the course of the pandemic. Some of these trends may be short lived while others could be here to stay.

The longer people have spent time at home, the more their spend on services like restaurants, travel and leisure has reduced while sales on goods such as groceries and home fitness equipment have grown in their place, as indicated in the below percentage share of goods vs. services: 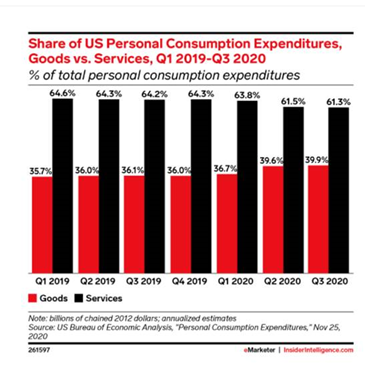 Brick-and-mortar sales have been on the decline for years as consumer spend has shifted online, this trend has become more pronounced over the course of the pandemic. eMarketer forecasted that ecommerce sales would increase by 32.4% in 2020 while brick-and-mortar would fall by 3.2%.

This is a trend that is likely to stay given the diverse demographic sets, who are now shopping online. 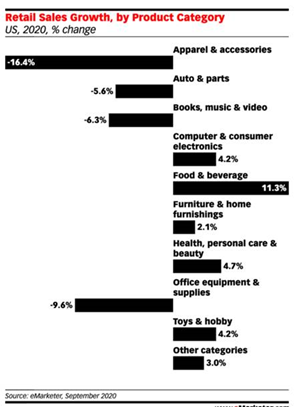 Like goods vs. services trends, priority spending by category is anticipated to shift back to pre-pandemic levels.

The top 10 US ecommerce stores in 2020 were dominated by big box stores like Walmart and Costco, while department stores like Macy’s lost some of their market share. 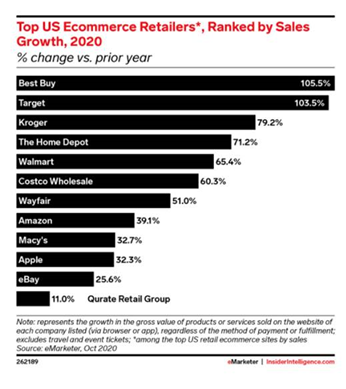 eMarketer anticipate that this is another trend that is likely to stay due to the flexibility of big box stores in offering a wider range of delivery options, e.g. curb side pickup.

If you want to discuss any of the stories included in this week's international marketing roundup, book in a conversation with us today.