Posted in International Marketing
On 16 Jul 2021
By Andrea Diaz

The European Commission announced that it would postpone plans for a new tax on tech giants. The decision comes as the US put pressure on the G20 to abandon the tax plan, after the G20 agreed on a worldwide company tax reform.

EU Commission spokesman Daniel Ferrie said to reporters in Brussels: "We have decided to put on hold our work on our new digital levy as a new EU own resource".

A draft OECD/G20 agreement on a minimum global company tax rate of 15% includes an agreement "to deconstruct existing digital levies that the United States has seen as discriminatory and to refrain from imposing comparable measures in the future," according to US Treasury Secretary Janet Yellen. "So the European Commission and the European Union members will have to determine how to proceed," she added on Sunday.

The Biden administration is afraid that it will make it more difficult for Congress to approve the larger G20 agreement if the digital levy passes. Three EU countries have so far refused to sign the proposed agreement: Ireland, Hungary, and Estonia.

Ireland has been successful in luring several large American corporations to its shores, including Google and Apple. Dublin wants to maintain its 12.5% business tax rate.

The plan is to levy a 0.3% tax on goods and services supplied online by companies with an annual turnover of €50 million or more that are based in the EU.

Western luxury companies have strengthened their presence in China, but as Chinese Gen-Z customers fully emerge, there will be more catching up to do.

If China has taught us anything, it is that previous success does not ensure future success. Many Western businesses are still battling to keep up with China's rapid growth, and a move to Chinese brands may appear to be a long way off. However, that transition will impact brands within the next decade, and for many, it will be a watershed moment.

Lorry drivers in the United Kingdom are quitting the profession in search of better pay and working conditions in other industries, compounding the country's persistent driver shortage. With a 100,000-driver shortage in the UK, the government has lowered driver working hours and is rumoured to be exploring a Visa system to entice European drivers who departed following Brexit to return.

According to Bloomberg, the sluggish vaccination of sailors is also endangering supply networks on a worldwide scale. As the number of diseases in the shipping business rises, the industry is raising the alarm. More than half of the world's 1.6 million mariners are from developing countries like India, the Philippines, and Indonesia, where vaccinations are frequently delayed.

“With this new delta strain, there's no doubt it's setting us behind, and the situation is growing worse,” said Esben Poulsson, chairman of the International Chamber of Shipping.

According to the World Economic Forum, thousands of sailors are being left stuck on their ships after their contracts have expired, due to increased regulations that prevent them from returning home.

It claims that this will force them out of the industry. It has also urged countries to do more to ensure that crew changes are carried out safely.

Despite being almost unknown outside of China, a new generation of Chinese direct-to-consumer firms is building a name for themselves at home—and even surpassing some of the world's biggest names. According to Alibaba, Chinese company Babycare outsold Procter & Gamble's Pampers during the country's recent 618 shopping holiday, which takes place every year around June 18.

In the first half of June 2021, Tmall revealed that 459 new brands (those that had been on the platform for less than three years) had the highest sales in their divisions. Last year, local beverage company Genki Forest outsold Coca-Cola and Pepsi on Tmall. 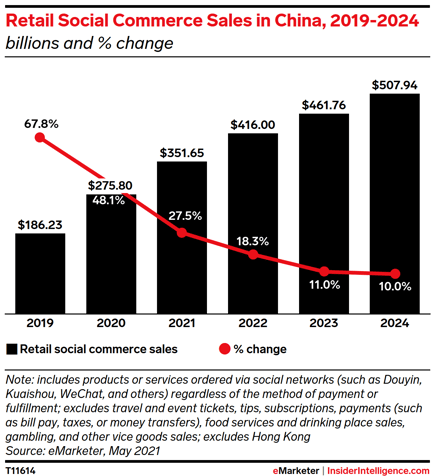 Direct-to-consumer (D2C) brands in China rely extensively on digital, while standalone apps are less common. Instead, they rely on the country's internet behemoths' digital ecosystems to reach consumers where they already are.

Some direct-to-consumer businesses outperform multinational giants by offering lower prices or adapting their products to local tastes and demands. In contrast to Nike and Adidas, premium athleisure company Sylphlike Loli keeps its costs below the RMB 300 ($43) mark. Perfect Diary, a Chinese cosmetics brand that caters to Chinese consumers' skin tones and concerns, has been snatching market share from L'Oréal's Maybelline in recent years.