International Marketing News: What You Missed During The Holidays

Posted in International Marketing
On 07 Jan 2022
By Andrea Diaz

The news cycle may have slowed, but international marketing didn't. Find out everything there is to know from recent news covered by Andrea Diaz.

INTERNATIONAL MARKETING NEWS: WHAT YOU MAY HAVE MISSED DURING THE HOLIDAYS

This New Year in the international newsletter a summary about what happened during the holiday break, updated information about EU-UK import laws, Vietnam was Asia's best-performing economy in 2020, and information about 93% of online stores in Italy accepting PayPal as a payment method.

Summary Of What You Missed During THe holidays

The news cycle may have slowed, but it did not completely stop, as many marketing and business professionals took time off at the end of the year.Here are some interesting points to update you.

Despite an increase in instances linked to the latest COVID-19 variant, SafeGraph data shows that US store and restaurant visits increased by as much as 4.8% in the week coming up to Christmas.According to Mastercard SpendingPulse, both in-store and online sales have increased, with overall sales up 8.5% from 2020. Even the most ardent customers may find it increasingly difficult to shop in-store for a while as more stores close due to omicron.

According to Bloomberg, Apple has closed more stores and imposed a mask mandate to offset the impact of omicron on its employees (and, presumably, earnings), though other locations stay open for restricted walk-in services.According to Insider, these actions come after more than 50 employees staged a walkout on Christmas Eve and called for a customer boycott of the company to fight for better working conditions.

After Christmas, Oculus' software topped the charts on both the iOS App Store and Google Play Store: the app that supports Meta's VR headset product became the No. 1 app on both platforms. This shows that the headsets' popularity skyrocketed this year.Baidu expects their metaverse to be fully operational in six years: Baidu vice president Ma Jie spoke to media ahead of Baidu Create 2021, the company's developer conference, which took place on December 27. The company's metaverse app, XiRang, is still six years away from going live. The company appears to be balancing the need to move swiftly to compete with Microsoft and Meta while also adhering to China's new anti-monopolistic legislation.The most popular domain in 2021 is TikTok: According to a recent survey from security firm Cloudflare, tiktok.com was requested more than any other domain, topping industry heavyweights like google.com and facebook.com. Microsoft, Apple, Amazon, Netflix, YouTube, Twitter, and WhatsApp domains rounded out the top ten.

TikTok is branching out into the culinary industry, forming a partnership with Virtual Dining Concepts (VDC) to offer delectable dishes from the popular app.The idea is to start with 300 locations in the United States and extend to 1,000 by the end of the year. The concept will be located in existing kitchens and will employ restaurant staff, but TikTok Kitchens will be in charge of recipes obtained from the social media network as well as food packing.

Walmart is being sued by California over environmental rules. The state's attorney general filed a complaint against Walmart in late December, alleging that the corporation illegally disposed of hazardous garbage.

Amazon workers in the Chicago area went on strike three days before Christmas to seek greater wages and extended break hours, according to Insider. Although multiple staff had tested positive, one worker complained in a video that the company was acting as if the pandemic had stopped. Since the outbreak, Amazon has been chastised for its safety and workplace policies, particularly when six employees perished in an Illinois warehouse a few weeks earlier due to a tornado in the area.

What Are The New Eu-To-Uk Import Laws?

As businesses get back to work after the holidays, many will have to adjust to a new border regime, with goods entering the UK from the EU subject to new laws from January 1, 2022.

What are the new regulations?

Additional rules for SPS goods, such as the completion of export health or phytosanitary certificates, will be phased in beginning on July 1.

On January 1, 2022, the government's new Goods Vehicle Movement Service (GVMS) became operational for goods moving between the EU and the UK.GVMS is required for hauliers transporting imported goods to UK ports who use a 'pre-lodgement' model rather than a 'temporary storage' approach. It is now also possible to use it to pre-submit export declarations for goods entering the EU.Thousands of extra workers are being deployed at UK ports to deal with the expected disruption, according to the Telegraph. The Home Office has recruited 2,000 additional Border Force personnel to deal with import controls, and HMRC has also added personnel to deal with the increased workload caused by the new changes.

According to the British Frozen Food Federation, January could be "troubled" as businesses grapple with the new regulations."We are concerned that not enough planning has been done to ensure that everyone in the food supply chain understands the new requirements," said chief executive Richard Harrow.

The Federation of Small Businesses also told the Guardian that the changes were particularly concerning for specialty small retailers such as delis.According to the Independent, border checks are expected to be minimal at first, at least until new rules and checks are implemented beginning in July. SPS checks for high-risk animal by-products, regulated plants and plant products, meats and meat products, and high-risk foods not of animal origin will also begin in July 2022.

Can Vietnam Emerge As The Next China?

In high-growth markets such as Greater China, Japan, Singapore, and South Korea, the luxury industry has seized every opportunity. However, it was unable to apply the same razor-sharp focus to other emerging markets in the region.In comparison to China or Japan, Vietnam's luxury goods market is relatively small, with revenue from the country's personal luxury goods market expected to reach $976 million in 2021. According to Statista, that market is expected to grow at a 6.67% annual rate (CAGR 2021-2025). In comparison, revenue from China's luxury goods market is expected to reach $43.5 billion by 2021.Vietnam's figures may appear unexceptional in terms of per capita revenue, which will only reach $9.94 in 2021. However, this figure does not represent the entire picture.

First and foremost, Vietnam has achieved remarkable results since the inception of I Mi in 1986. In only 35 years, the Asian nation went from being one of the world's poorest to a thriving middle-income economy. GDP per capita increased 2.7 times between 2002 and 2020, approaching $2,800. Simultaneously, poverty rates ($1.90 per day) fell from more than 32% in 2011 to less than 2%, according to The World Bank.Vietnam was Asia's best-performing economy in 2020, even outperforming China. According to government projections from December, the Vietnamese economy increased by 2.9% YoY in 2020. CNBC points out that this increase puts Vietnam ahead of China.

Furthermore, Vietnam's middle-class population has grown dramatically in recent years.In addition, the number of High Earners, Not Rich Yet (HENRYs), and ultra-wealthy people in Vietnam is growing. According to Knight Frank, the number of people with a net worth of $1-30 million will increase by 32% to more than 25,800 by 2025.Finally, luxury brands should be optimistic about Vietnam due to the strong demand for their products. This is particularly true given that consumers are limited to their homes and are unable to travel to Singapore or Greater China.

Method of payment over the internet PayPal is well-known in Europe, but the extent to which it is used in online commerce differs by country. 93% of online stores in Italy accept PayPal as a payment method. PayPal, on the other hand, is only available in about 1% of Serbian online retailers.

PayPal has become a popular payment option in Europe. It was the most popular payment method in Germany and the United Kingdom just a year ago. According to the Statista Global Consumer Survey, online payment service customers in the UK, France, and Germany use it at rates above 90%.When compared to other payment options, PayPal is extremely popular. Only 12 of the 43 countries studied by ecommerceDB have single-digit utilization rates for the payment method. Only two of the analyzed nations, for example, have double-digit utilization rates for AmazonPay. ecommerceDB recently researched on the vendor side to determine which online retailers accept PayPal as a payment method. The study looked at the top 100 internet retailers from 43 different countries. Italian internet retailers lead the way in PayPal adoption, with at least 93% of them accepting the payment method. 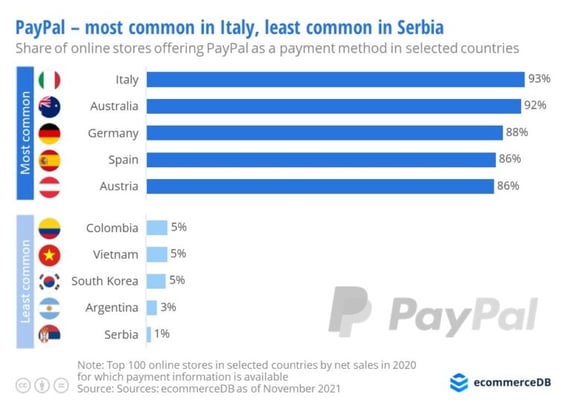 PayPal is accepted as a payment method in 88% of German internet retailers. Spain and Austria came in second and third, respectively, with 86% of online retailers offering PayPal. Serbia has the lowest percentage of online retailers that accept PayPal, with only 1% of the top 100 stores in the country using the service. Most Western European countries have a high ranking.
The study looked at countries outside of Europe as well. Australia also did well, with 92% of stores using PayPal. Most Western European countries and the United States, according to ecommerceDB, rank quite high, while Asian and Eastern European countries tend to rank lower.
That wraps up the International Newsletter from this week! If you would like Andrea and the team to support your brand's international success, then get in touch!