Posted in Social Media
On 05 Feb 2014
By Martin Boonham

Facebook has turned ten years old this week. Here ClickThrough copywriter, Martin Boonham, looks at ten ways in which the platform has developed into a great digital marketing platform with plenty of good stuff to offer over the years – even it does include the occasional cat Meme.

Facebook has turned ten. Happy birthday and all that. It has certainly grown exponentially over the years, as its one billion plus users can attest to. From a digital marketing perspective this growth is all good. In fact from when it was first listed on the stock market back in 2012, Facebook has tried more than ever to really cosy up to marketers, and vice versa (even with the blend of cats, babies and dinners we also see on our News Feeds).

Here are ten reasons why the relationship between the two has been so chummy.

Presumably following the mantra ‘bigger is better’, Facebook made a pretty major shift to the way its News Feed looked in 2013. With the update, photographs, check-ins and other updates all appear larger than they did previously. The rationale behind the decision – according to Mark Zuckerberg himself – was to make the site less cluttered.

Of course, photos have always been a dominant factor on the News Feed and the shift in the way the feed became ‘less cluttered’ in March 2013 certainly put Zuckerberg’s idea into practice.

It also happened to open a lot of doors to bigger sized advertising opportunities, coincidence? We think not. After all there have been plenty of suggestions that ads in a News Feed generate a higher click through rate than those elsewhere on the site.

Graph Search certainly caused a storm when it first launched, admittedly for somewhat negative reasons. For example, “ Single women who live nearby and who are interested in men and like Getting Drunk!” (It’s a genuine search query in fairness) and all sorts of other ludicrous searches were bandied around in the media. But put in to practice the introduction of Graph Search offered marketers a good way to capitalise on good old fashioned word of mouth.

Below for example shows just some of the results from a quick search (although don’t get me started on Candy Crush). 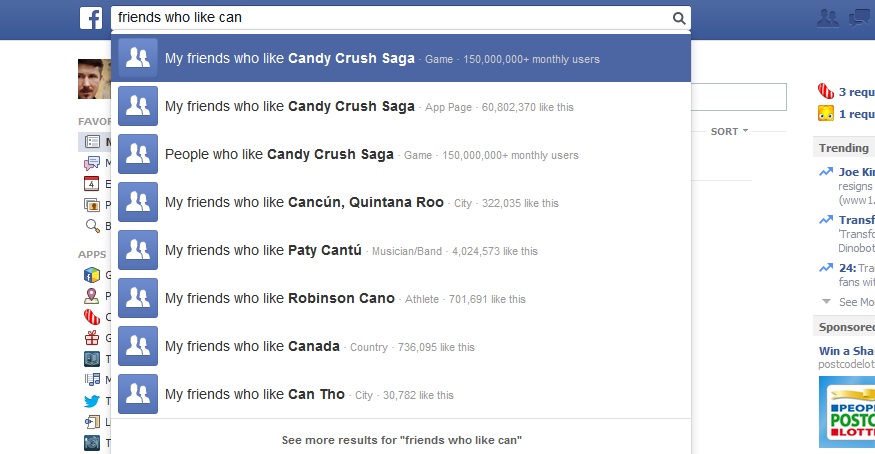 Technically a good restaurant or any other business will be able to capitalise from this lovely bit of publicity, and what better way to get approval for a place to go than a number of your friends liking. The more likes a place has, the more likely you are to take people’s words for it.

Graph search is also available on mobile as of this week, which neatly leads me on to my next topic…

Many firms struggled with adapting to mobile advertising, non-more so than the almighty Google – as ever, the issue revolves around making money on mobile platforms. Certainly as this New York Times piece attests to, Google is still struggling with some issues of mobile.

However, Facebook seemed to have no such troubles with mobile advertising, posting some impressive figures for 2013 as a result. A recent financial report for the social media giant accredited a far chunk of this success to mobile. And with more and more people using smartphones and tablets, the market for mobile advertising online likely to increase.

That was the claim of a study in late October 2013 at least. The study claimed Facebook delivered a massive 30 times more e-Commerce customers than its social networking rival Twitter. Consultancy firm Curebit delivered that verdict, although Business Insider also conducted their own e-commerce research. Facebook still came out on top generating 28% of e-Commerce sales across social media platforms, but Twitter delivered 22%. Conclusion = Facebook is better than its rivals for e-Commerce.

Although in the run up to Christmas you may not have noticed, Facebook also experimented with video ads in December 2013 for the film Divergent. In truth they’d kind of rolled video ads out before, but this was the first time a real push was made. With mobile being all the rage, I suspect these ads and a certain photo sharing app Facebook acquired are set to be big players this year.

This April will mark two years since Facebook purchased Instagram. In essence this has opened up Facebook’s marketing offerings quite substantially, and although it is obviously a separate platform, the benefits of this acquisition for digital marketers are hard to ignore. It certainly connects to the rhetoric established earlier on photos being a big deal on Facebook, and Instagram gives visual driven marketing that little bit extra.

Ok this one was a big deal of advertisers, as it was a quick and easy way to advertise on a user’s feed. Unfortunately, a number of privacy issues and concerns mean this marketing foray will come to somewhat of an early end. Facebook expects to shelve Sponsored Stories in April.

Despite the claims of #copycatting the likes of Twitter, Facebook decided to bring in its own version of clickable hashtags. The precedence in this is it will potentially allow Twitter style sponsored trends. Copywriter Jack Adams, blogged on the topic giving it a #thumbsup.

Marketing is all about people and let’s face it, in terms of numbers Facebook offers an unparalleled access to users across the globe. That’s why so many marketing types will always want to channel into its success.

Facebook launched its Lookalike Audiences service in March 2013. This, joined with its Custom Audience tool, offer digital marketers a further way to tap into their customer database and develop strategies for further targeting the markets, using interests and user demographics. The benefits of this were flagged by Dave Chaffey in a blog for ClickThrough last year. Another boon for digital marketers.

What is perhaps the biggest sign of developments for Facebook is that many of the changes listed in this blog have actually only occurred in the last year or so. This shows just how much effort Facebook has put into monetising its offering since it first hit the stock market – back in what seems forever ago now – in May 2012.

Through other things such as Promoted Posts, Facebook contests (this is a traditional marketing option), Business Pages and Classic Ads and you will see there is actually a lot more than ten ways a digital marketer can get their teeth stuck into Facebook.

One thing is for certain, Facebook and marketers are sure to have plenty more reasons to cosy up in 2014 and beyond.