Posted in Google,SEO and Content
On 08 Aug 2016
By Tom Williams

Tom Williams brings you the latest in search engine optimisation news and advice, including AMPs move to the SERPs, Google’s algorithm update, a new Google help document, and more.

AMPs Make Their Way to SERPs

Google’s Accelerated Mobile Pages (AMPs) were initially available in Google’s “Top Stories” section.  However, Google has now announced that AMPs will be coming to the main organic mobile search results.

AMPs have been around for less than six months, having already amassed 150 million indexed AMPs, with 4 million new pages added every week. Various companies have adopted AMPs including eBay, Disney, TripAdvisor, and Reddit.

Google’s VP of Engineering, Dave Besbris, has said that AMP pages will come to the SERPs, but they will not be receiving a ranking boost.  However, it has been stated in the past that page speed and page loading time are a ranking factor, and considering AMP pages load four times faster than usual pages, they may rank higher than mobile friendly sites. Google has said if there are two similar sites, one mobile-friendly, and one AMP, the user will be served the AMP.

Last week we saw what may have been the arrival of a Google Algorithm update. It was confirmed by Google that we would soon be seeing a Penguin update, and lots of fluctuations in data, rankings and traffic followed. Since then, the same has happened again, in what seems like an algorithm reverse. There was a lot of chatter between webmasters about ranking changes as well as traffic surges on their sites. As well as this, tracking tools including Mozcast and SERPMetrics have been seeing spikes in data.

Could we be seeing the reversal of a Google Algorithm? Or another update targeting different ranking factors? Until a confirmation from Google is released, we cannot be entirely sure what it is that has affected rankings.

How Google Treats Subdomains and Subdirectories

In a recent Google Hangout on Google+, John Mueller said that subdomains and subdirectories don’t matter too much. John said that Google does a good job of figuring out what you are trying to do.

The topic arose when John Mueller was asked by a Google Hangout visitor:

Can you talk about how you treat sub domains? We have five. Similar topics but different enough we would have put them in separate folders. Instead we used subdomains. Does this hurt us in the rankings?

To which John Mueller replied:

No, not in general.
So we recognise that some sites use subdomains as different parts of the site. And, in the same way that other sites might use sub directories….
…So that's not something that would kind of like improve or hurt rankings. It's more a matter of us figuring that out. And so far I've seen our algorithms do a pretty good job of that.

Whilst answering the question, John also warned site owners of the issues that could come about as a result of having a large quantity of wildcard subdomains, when he said “The main thing I'd watch out for is that you're not using wildcard subdomains because that can make crawling really, really hard.”

To conclude, subdomains and subdirectories do not harm rankings in the majority of situations, it is only when a site has a large amount of wildcard subdomains that rankings can take a penalty.

On 2 August, Google released a new help document that explains and defines three core metrics that webmasters will come across when checking their Google Search Analytics report. These three metrics are impressions, clicks, and position. 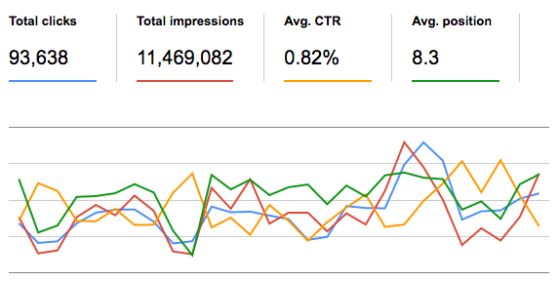 The guide helps users to understand how each metric changes depending on analytic results. Visit Search Engine Land to learn more about the new help document.

Whiteboard Friday – Should My Landing Page Be SEO Focused, Conversion Focused, Or Both?

In this week’s episode of Whiteboard Friday, Rand Fishkin covers the topic of choosing how to focus your landing page – SEO, or Conversion.

Learn what you can do to improve your rankings with a Technical SEO Audit from our experienced team of SEO specialists.