Facebook is aiming to bring a form of its Messenger app to areas with limited internet connection.

The aim of the app is to allow everyone to connect worldwide, no matter their technological availability. The app will initially be rolled out in Kenya, Tunisia, Malaysia, Sri Lanka and Venezuela, and Facebook say it will be available in many other countries in the coming months.

Twitter has rolled out a new feature that lets you add a Periscope link to your profile. The feature is integrated with the Periscope live-streaming platform, and it simply allows users to provide a link to their Periscope account on their Twitter profile.

The new Periscope link feature is very similar to the Vine link that was added to Twitter profiles about a year ago.  When you enable the Periscope link, it will appear under your Twitter bio, with a small periscope logo icon next to it.

Facebook has launched a Marketplace feature, allowing users above the age of 18 to buy and sell goods with users worldwide.

The Marketplace feature allows users to search for goods using a search bar, and filter results based on location, category, and price. Along with the manual location filtering option, Facebook offers a built-in location tool that lets you adjust the region you are shopping in, or switch to another altogether.

Alongside images, users can post a description, price, general location and profile details in their ads, and if you see an item you’re thinking of buying, you can save the item to find later. It’s also possible to contact sellers directly from the Marketplace.

The feature began rolling out on 3 October 2016, and is so far live in 4 countries (mobile only): Australia, New Zealand, the US, and the UK.  Facebook has said that it will soon be available in more countries, and a desktop version will be released in coming months.

Facebook has updated its Messenger platform, adding a tiny feature that allows users to save links to access later.

Sometimes, you want to read an article or watch a video that your friend shared with you on Messenger, but you don't always have the time to do so right away. Or, you might want to save that link or video for the future, so you can re-read or re-watch, or pass along to another friend. Today, we're introducing Save to Facebook in Messenger, making it simple to save the links, videos, and events that interest you, so you can easily come back to them later—when the moment is right for you.

Any links saved on Messenger then go to a special folder for ease of access later on. 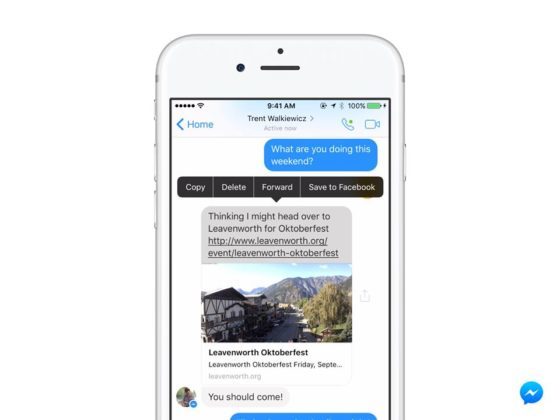 Want to improve your social media marketing strategy? Find out how with a Social Media Audit from our experts.