International Marketing News: Christmas To Be Safe From Supply Issues

Posted in International Marketing
On 05 Nov 2021
By Andrea Diaz

This week, read about Christmas not having supply chain issues, walled garden ad spend and some Shopify news!

This week in the international newsletter we see how important customer relationship management is, predictions that Christmas will not be affected by the supply chain limitations, Shopify expanding cross-border and US digital ad expenditure will surpass $200 billion.

Christmas SHopping Will Be Safe From Supply Chain Issues

According to Maersk CEO Soren Skou clients said that they were in good shape for the holiday season, but that the company was chartering more ships, keeping ports open longer, and building more facilities to mitigate risk.

Maersk, the world's largest shipping firm, handled nearly 20% of all shipping containers in Q3. Pre-tax profits increased fivefold to $5.9 billion. Skou also told the BBC that the present supply chain disruption was showing no signs of easing, as businesses attempted to restore inventories following the pandemic."The reality is that consumer demand is high, but our customers' inventories are low," he explained. Maersk has also stated that there is "limited visibility" as to when global supply chain limitations would be solved. Skou told Sky News: "The entire system has become one gigantic bottleneck."

Approximately 300 vessels, he added, were currently stuck outside major ports around the world. Nearly 80 people are waiting to reach the port in Los Angeles, with a "few" outside Felixstowe and others stranded in Chinese ports such as Shanghai and Ningbo.According to the Telegraph, a shortage of lorry drivers and congestion at the UK's busiest container port has forced shipping companies to keep empty containers on a nearby field.

A former RAF airport in Eye, Suffolk, 30 miles from Felixstowe, has over 1,000 extra containers piled up.

One Negative Interaction Might Lead To A Disastrous Brand Break-Up

The core service delivery, such as a hotel room or the buying experience, is rarely the cause of a luxury brand's failure.

Yet, in many cases, it occurs as a result of seemingly minor elements that make a consumer feel undervalued. In the end, though, only the customer's perspective matters, not what the brand believes is right.

Luxury has a lot in common with a romantic relationship. When brands perform their job well, customers can't help but fall in love with them because they provide exceptional value. As a result, luxury buyers want the brand to pay them constant attention and affection. One negative interaction is enough to destroy trust, resulting in a typically irreversible brand break-up.

And these break-ups come at a high price. Customers who end their relationship with a business rarely "walk away," as they would with a romantic breakup. They depart angry, upset, and ready to communicate their feelings with others when they leave.Unfortunately, brands are frequently unaware of the problem and hence unable to intervene. Inadequate processes, a lack of staff training, or simply poor, inflexible, and time-consuming service delivery are all reasons why luxury brands lose many of their best customers.Luxury firms could avoid losing millions of dollars in revenue if they paid close attention to their customers' journey.To prevent break-ups, brands must have contingency plans and procedures in place at crucial service delivery touchpoints. If not now, then in the future, failing to do so will most likely cost you your best customers. Many luxury brands make this serious mistake, therefore don't make the same mistake.

Shopify Attempting To Profit From The Expanding Cross-Border ecommerce Business

Merchants looking to maintain their eCommerce growth in 2022 are looking to international markets and cross-border trade, and platforms like Shopify are seeking to accommodate their needs.

Last month, the business unveiled Shopify Markets, a worldwide eCommerce centre for merchants, and added B2B functionality to the premium platform Shopify Plus. Shopify is well-positioned to benefit from businesses' desire to expand global, thanks to its high number of US-based merchants and growing foreign traffic.

This year, US digital ad expenditure will surpass $200 billion, representing a 38.3% increase over 2020. Google, Facebook, and Amazon will account for 64% of all digital ad spending in the United States this year, around the same as they did in 2020. 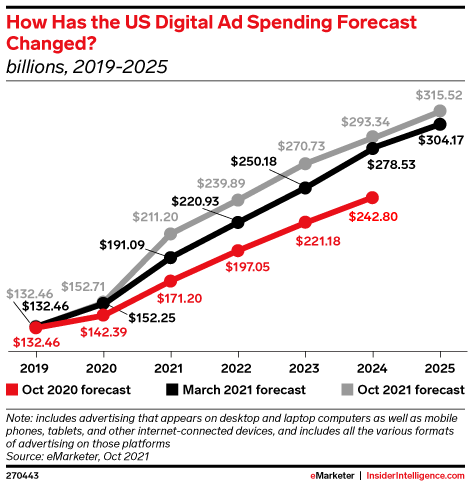