International Marketing News: Countries With The Most eCommerce Users

Posted in International Marketing
On 04 Feb 2022
By Andrea Diaz

In this weeks International Marketing News, Andrea Diaz takes us through eCommerce, retail sales, and more.

This week, learn about countries with the highest numbers of eCommerce users, supply chain disruptions in China due to COVID-19, an EU consumer law disagreement from Finland and the Netherlands, and news about Northern Ireland's imports from the UK.

The Countries With The Most eCommerce Users and Fastest Growing Sales

In 2022, China will continue to be the world's most heavily penetrated eCommerce market, with 46.3% of all retail purchases taking place online. The UK and South Korea round out the top three, with eCommerce orders accounting for 36.3% and 32.2% of retail purchases, respectively. However, here is where eCommerce sales will grow the fastest in 2022. This year, the Philippines and India will lead the world in retail eCommerce sales growth, with increases of 25.9% and 25.5%, respectively. Latin American and Southeast Asian countries will make up the majority of the top ten list, with the United States taking the final spot as the only advanced economy to slip into the rankings, with 15.9% growth.

None of the Western European countries studied will experience double-digit growth beginning this year and continuing through the end of the forecast period in 2025. In contrast, eCommerce sales will increase at those rates in every Latin American market. 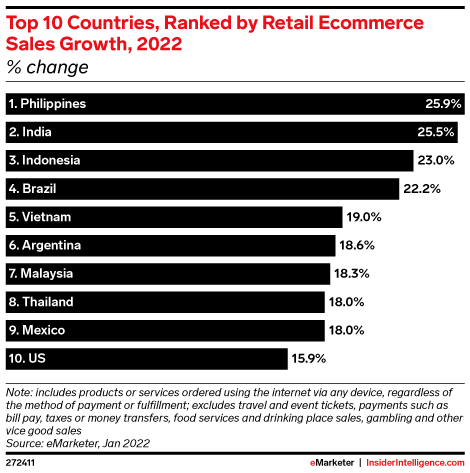 The Manufacturing Purchasing Managers Index fell to 50.1 in January from 50.3 in December, according to the National Bureau of Statistics. According to Reuters, the PMI just stayed over the 50-point threshold that separates growth from contraction. Despite this, government estimates contradict data from a private poll that shows industry activity has dropped at its fastest rate in 23 months.

China's government has stepped up its zero-COVID approach as local coronavirus infections have increased. Consumers have been held in place and away from domestic shopping meccas like Hainan and Hong Kong due to sporadic travel bans and lockdowns.

Last autumn, China's retail activity began to stutter when sales fell short of expectations. Retail sales rose 3.9% year over year in November but fell short of the 4.6% growth predicted by a Reuters survey.

Alibaba lowered its sales estimates dramatically in its quarterly results, blaming weak growth in Chinese consumer spending. Alibaba's US-listed shares tumbled more than 10%, according to the Financial Times, after the e-commerce giant anticipated 20-23% sales growth for 2022 due to "softer market circumstances." At the same time, consumer confidence fell in November and December, indicating that people are becoming more conscious of their spending habits.

As a result, demand for Chinese-made goods will continue to rise around the world. However, China's power restrictions and stringent lockdowns would surely increase manufacturing pressure.

According to CNBC, China's senior officials warned at an economic planning meeting last December that growth is under "triple pressure" due to falling demand, supply shocks, and deteriorating expectations.

Without a doubt, global businesses should brace themselves for a difficult first half of 2022 in China.

Dutch And Finnish Consumer Guarantees Are In Discord With EU Law

Customers are entitled to a product guarantee of up to two years under new European regulations. When a product fails, retailers are not permitted to charge a usage fee. However, because Finland and the Netherlands have longer guarantee periods, this can cause issues for online merchants.

The European Union (EU) rules are intended to harmonize eCommerce and consumer guarantees across Europe. However, because of different guarantee periods in the Netherlands and Finland, the rules may instead harm retailers.

Customers in the Netherlands and Finland currently have a longer guarantee period. This is related to the lifespan of a product. This is 6 years for a television and 3 years for a computer, for example. If a product fails prematurely, a customer can receive a replacement in exchange for a fee based on the number of years of use.

This usage fee is prohibited by EU regulations. However, the longer guarantee period remains in effect. This means that after 5 years, a customer can get a new television without paying a fee.

In a letter to the Dutch government, Dutch eCommerce advocate Thuiswinkel argues that this is unfair to retailers. The organization wishes to implement a maximum guarantee of two years, as is common in the rest of Europe. 'If that is not possible, retailers should be able to charge a usage fee,' the organization writes.

According to the Dutch branch organization, online sellers are now paying the price for breaking EU rules. "Because of it, there is an unfair competitive position compared to other EU countries," says Marlene ten Ham, general manager of Thuiswinkel and a board member of Ecommerce Europe. We strongly urge that the law change not be implemented to protect retailers and consumers."

Northern Ireland's government minister Edwin Poots stated that he had ordered officials at NI ports to stop checking agri-food imports from the United Kingdom; however, reports indicate that those checks are still being carried out.

As a result, Sinn Fein deputy First Minister Michelle O'Neill is automatically removed from her position, as one cannot hold office without the other under Stormont's power-sharing rules.

Northern Ireland Secretary Brandon Lewis described the DUP's decision to withdraw the First Minister from the NI Executive as "extremely disappointing" as the future of power-sharing government in Northern Ireland hung in the balance.

In the House of Commons, George Eustice, the secretary of state for environment, food, and rural affairs, stated that "there have been no operational changes on the ground as yet."

This point was echoed by European Commission spokesman Eric Mamer, who told reporters that EU experts on the ground were satisfied that the checks agreed upon in the Withdrawal Agreement were still being carried out.

Manufacturing NI, a business group, stated this week that checks should continue to comply with the international treaty.

"Regardless of events, the legal and administrative advice is that these are international obligations on traders, and they should continue to meet those obligations whether or not there's a guy with a hi-vis to greet them at the port," the group said in a statement posted on Twitter

At the same time, O'Neill called Poots' actions a "stunt" ahead of the NI Assembly elections on May 5.

Meanwhile, during a visit to Blackpool today, Prime Minister Boris Johnson told reporters that "having checks on goods that are basically circulating within the United Kingdom's single market" was "crazy."

That wraps up the International Newsletter! If you would like Andrea and the team to support your brand's international success, then get in touch!