Posted in International Marketing
On 02 Jul 2021
By Andrea Diaz

Facebook is developing a smartwatch that could be powered by google

For 2022, Facebook is developing a smartwatch based on its messaging services, with a focus on health and fitness.

It's evident that Facebook wants to draw as many people as possible away from Google and Apple's ecosystems, and hardware appears to be their method.

mOST BUY NOW, PAY LATER USERS ARE GEN Z OR MILLENNIALS IN THE U.S.A

According to the first user forecast for these financing choices, more than 45 million people in the United States aged 14 and above will utilise buy now, pay later (BNPL) services this year. This is an increase of 81.2% from 2020, and the age range of BNPL customers will also broaden in the coming years.

More than 80% of BNPL users were millennials or Gen Zers (14 and above) in 2018, when today's important companies like Affirm, Afterpay, and Klarna were still establishing themselves as respectable payment providers. This year, the figure will decline to 73.2%, however, younger customers are still more likely to experiment with alternative payment methods than the general public. 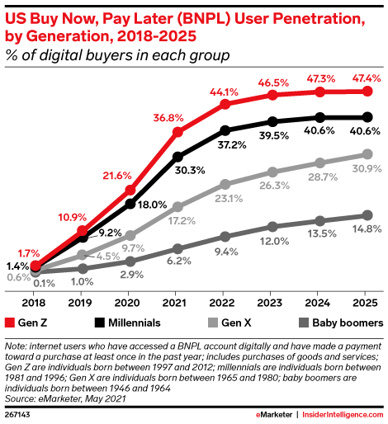 India's wealthy and aspiring classes are rapidly expanding, and their insatiable need for luxury is remindful of China's.

According to the Credit Suisse Global Wealth Report, India has 4,593 ultra-high-net-worth individuals in 2019, ranking fourth behind the United States, China, and Germany.

According to India Retailing, the luxury market in India will be worth more than $200 billion by 2030. As India emerges as a global luxury hotspot, international businesses are increasingly optimistic about growing their footprint and raising brand awareness in the country. However, in one of the world's largest and most populous countries, marketers must simply pay attention to their customers. A "one-size-fits-all" approach will not work because consumer trends and behaviours varies among areas, cities, and social groupings.

This Year, Upfront CTV Ad Expenditure In The United States Will Exceed $4 BiLLION

Advertisers will spend about half as much on upfront CTV video ads this year as they did last year, totalling $4.51 billion.

This figure accounts for all CTV video ad expenditure that has been committed in advance, such as spending from the TV Upfronts, the Interactive Advertising Bureau (IAB) Digital Content NewFronts, and other events and meetings throughout the year. 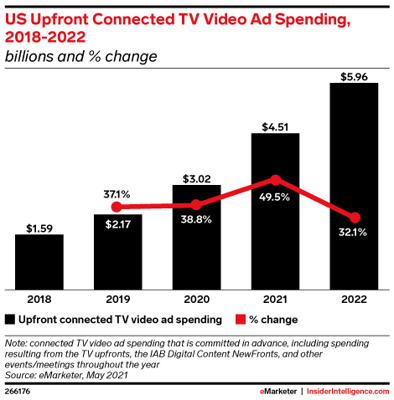 Because digital inventory is becoming increasingly important in upfront deals, advertisers are changing their approach this year, arguing for more flexible media placement options and a shorter negotiation period.

The UK and Singapore have begun talks on a ground-breaking digital economy agreement (DEA) that will allow British businesses to expand their service offerings.

Both countries are digital economy leaders, and in 2019, 70% of UK services exports to Singapore, worth £3.2 billion, were delivered digitally, ranging from banking and legal services to music streaming and e-books. How to strengthen co-operation in growth sectors like fintech and lawtech are the topics being discussed.

The goal, according to Truss, is to make the UK a global centre for services and digital trade.