Posted in International Marketing
On 01 Oct 2021
By Andrea Diaz

From Shopify expanding international operations to France changing the books business game for Amazon, Opel's issue and Chinese cloud news, you'll find it all in our international update.

This week in the international news: Shopify increases their international e-commerce operations, France changing the books business game for Amazon, the German manufacturer Opel shut shown due to global shortage of microchips and the Chinese cloud computing expected to grow.

Shopify Are Set To Expand Their International eCommerce Operations

According to the corporation, more than 27% of retail visits in July 2021 originated from outside the United States.

Cross-border shopping is already possible on the platform, but Shopify Markets will make it easier for merchants to adapt their storefronts to foreign transactions. The hub will assist stores comply with local legislation and price requirements by handling currency conversions, language modifications, and regional SEO. 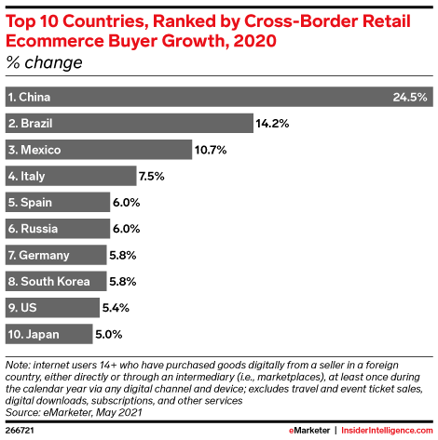 In 2022, the number of cross-border e-commerce buyers in the United States will increase by only 4.5% (or 2.9 million), but other markets will develop at a faster rate. With a 24.5% increase in cross-border e-commerce shopper growth in 2020, Shopify's relationships with Chinese tech heavyweights like Alipay and ByteDance's TikTok will let merchants more easily join the market.

Shopify's investment in Yotpo provides merchants with yet another layer of automation, and it could be a precursor to a future marketing acquisition.
Yotpo, one of the Shopify ecosystem's marketing stack services, has become a key boost for the platform, allowing merchants of all sizes to reach and retain customers.

Because of these advantages, they're attractive acquisition targets: Attentive, an SMS marketing firm recently purchased Privy, another Shopify ecosystem app, for an undisclosed sum.

A new measure in France would establish minimum rates for book shipping, hiking charges for corporations like Amazon from near-zero.

French lawmakers will consider a draft bill this week that would effectively prevent Amazon from providing virtually free delivery for book sales – a big selling point for the online platform over traditional bookstores.

The draft measure, which comes from the Senate and has President Emmanuel Macron's support, attempts to defend brick-and-mortar stores from Amazon, which has left them in a state of flux. It's the latest in a series of actions aimed at defending local culture against foreign digital firms, including support for press publishers against Google and Facebook and TV broadcasters against Netflix.

In an interview, Géraldine Bannier stated, "The goal is to limit the distortion of competition between online players who can give book deliveries for one cent and the others."

In the lower house, Bannier, an MP from Emmanuel Macron's allies MoDem, is in charge of the bill. It's no secret that the law is aimed mostly — if not exclusively — at Amazon, which built its global empire on low-cost, quick shipping.

"This operator's strategy is well-known: it sacrifices profits to dominate the market through aggressive price practises. "It compensates for its losses by offering additional services, effectively turning the book into a loss leader," Culture Minister Roselyne Bachelot said during Senate debates in June, adding that the bill aimed to "directly challenge this strategy".

Opel Plant In Germany Will Close Due To Global Chip SHortage

Opel, a German manufacturer, recently stated that a plant in Eisenach, Germany, will be temporarily shut down by next year. Employees will be furloughed until the facility reopens, which is expected to happen early next year, according to the company.

The reason provided was a global shortage of microchips due to supply chain disruptions and manpower constraints caused by the COVID-19 pandemic.

Opel is "in an extraordinary situation" as a result of the ongoing pandemic and global semiconductor shortage, according to a spokeswoman.

Raw materials such as plastics, metals, and lumber are in short supply in Germany, as they are in many other countries throughout the world. Due to the scarcity of semiconductors, which are required for both conventional and electric cars, this has had a significant impact on car production, one of the country's most profitable businesses.

Volkswagen said earlier this year that it would be reducing production at its flagship factory in Wolfsburg. According to Alix Partners, around 7.7 million automobiles would not be produced globally this year, resulting in a loss of €210 billion ($243.5 billion).

According to Canalys statistics, cloud infrastructure services spending in China increased by 54 % year over year in Q2 2021, reaching US$6.6 billion, driven by Tencent Cloud.

Tencent Cloud accounted for approximately 19% cloud infrastructure spending in China, but it came in third place after Alibaba Cloud and Huawei Cloud, with Baidu AI Cloud in fourth place. The top four companies climbed by a combined 56%, accounting for 80 % cloud spending in China.

With a 33.8% market share, Alibaba Cloud led China's cloud industry, albeit its growth slowed to 30% in the third quarter. With a 19% market share in Q2 2021, Huawei remained in second place in China's cloud infrastructure industry.
According to IDC, the overall market size of global public cloud services (IAAs/PAAS/SaaS) would reach US $312.42 billion in 2020, representing a 24.1% YoY growth.