Posted in International Marketing
On 07 Aug 2020
By Alison Booth

ClickThrough's Head of International Marketing, Alison Humphries, talks us through the latest news stories from this week. From TikTok ownership to the global outlook of ad spend, read more.

What's new, important and interesting in the world of international marketing? This week we look at the question hanging over TikTok’s ownership, which markets are set to invest the most in advertising on and offline over the next four years, Maersk’s efforts to bring shipping supply chain management online and an investigation into reach through Peacock’s advertising services.

OWNER OF TIKTOK WOULD PREFER THE APP TO REMAIN INDEPENDENT

TikTok needs to part company with owner Bytedance to be able to continue to operate overseas. However, scmp.com report that Microsoft are keen to take over TikTok, but are experiencing resistance from Bytedance.

Trump is threatening to ban the app, which would kill business in the US if it is removed from Google and Apple’s app stores. Bytedance are happy to agree to an independent spinoff, if operations in the US can continue. Independence may then ease international operations, as the app is currently banned in India and is under investigation in Australia.

Differing news sources report varying statuses on the Microsoft take-over bid between Microsoft being ready to take over TikTok and pausing negotiations.

TikTok has consistently cited that user data is not at risk or that it is a security risk to other countries. However, rumours that Bytedance could succumb to US pressures has incited a nationalist backlash in China.

James Ling, co-founder of travel service Ctrip, put his point forward that China should respond to any US ban on TikTok or other Chinese apps by liberalising China’s internet controls. If Google, Facebook and other currently prohibited websites were permitted to operate in China, it could create the impression that China a more open media environment than the US.

THE GLOBAL OUTLOOK OF AD SPEND

The US continues to invest the most in total and digital advertising according to eMarketer. While in recent times China has been on a trajectory to catch up, this has now waned, and it is now looking unlikely that the two markets will align in the future. Japan has comfortably retained third place despite the market being 2.5 times smaller than China. The top 10 countries have rarely moved positions in the last 10 years, but swiftly growing South Korea looks set to take Italy’s tenth place in the rankings. 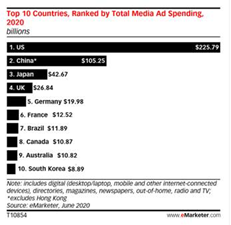 China and India have shown the highest level of growth since 2017, but the pandemic has slowed India’s pace significantly in company with Indonesia, Mexico and Brazil, who will be posting double digit declines in ad spend. Forecasts currently indicate that India will reclaim its position in the top ten and could be the fastest growing market in 2021 with a predicted increase of 30.5%.

The new system takes Maersk closer towards digitisation of shipping and potentially becoming the shipping world’s answer to FedEx and UPS, according to shipping news website Splash247.com

Moving more of the company’s services online will allow document amendments to be done over the phone or via email by the 1st September 2020.

WILL PEACOCK BECOME THE NEXT STAR OF STREAMING SERVICES?

eMarketer investigate the time spent on Peacock by the impressively high initial 10 million sign ups to the service. 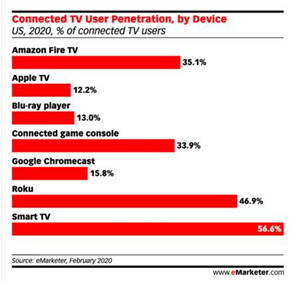 Although a late entrant to the streaming services market, Peacock reported an acquisition of 4.1 million users in its first month of activity. These numbers sound impressive, but the key is reviewing the time spent on the platform.

The initial high take up numbers may have been assuaged by Comcast and Cox offering the service free to subscribers in April with an optional ad free tier of $5, while Netflix and HBO Max offered standard plans for $12.99 and $14.99.

Full rollout of the platform is underway this month to non-Comcast subscribers with an ad supported service of $5 per month and $10 without ads. The service is still unavailable on popular platforms like Roku and Amazon Fire, which account for 46.9% and 35.1% of CTV users – which presents a challenge for the future.

The time spent on the platform initially looks concerning after receiving very little usage amongst the 4.5 million downloads in the first month.

The low priced and free tiers are attractive options to consumers, but this does not mean that the platform will have a high volume of usage, this needs to be nurtured through engaging content to keep users interested and to preserve advertising investment.

Wondering how international marketing might work for your business? Get in touch with our experts to find out more about our services.