Posted in International Marketing
On 08 Oct 2021
By Andrea Diaz

From US ad spend increase expectations to data on online shopping and international purchases, find out more about the latest international marketing news.

This week in the international newsletter: Digital ad spending expected to grow, online shoppers are open to cross-border purchases, V-commerce could be the next big digital thing and China's virtual idols: Ayayi and Luo Tianyi.

Last year, digital ad expenditure in the United States had mixed outcomes across industries. On the one hand, total expenditure growth slowed from pre-pandemic levels, and two industries — automotive and travel — dramatically reduced their spending. On the other hand, when the pandemic created new customer habits that drove more of their business online, numerous industries unexpectedly increased their digital investments.

In 2020, total digital ad spending climbed by 14.9% YoY across all industries, a moderate slowdown from previous years. Overall, we expect a robust rebound in 2021, with a 25.5% increase, although industry-level performance will continue to vary greatly. 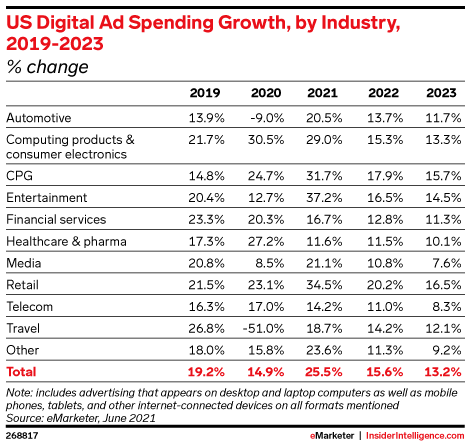 Spending changes last year ranged from a 30.5% increase to a 51% decline across the 10 industries. However, every industry will increase ad expenditure by at least 10% this year. Some may have enormous rebounds, while others will remain stable or even slow down.

As a result of the pandemic, an increasing number of people are turning to online retailers. It has encouraged people to buy from shops they had never ordered from previously, resulting in a massive increase in cross-border buying.
Up to 55% of internet buyers from all around the world are willing to purchase holiday gifts from countries other than their own. This is based on a Logistyx commissioned survey of 2,035 online shoppers from the United States, the United Kingdom, Germany, and Australia.

The survey's findings highlight five takeaways for online businesses looking to capitalise on cross-border sales during the holiday season. Despite their desire to shop elsewhere, over half of consumers (48%) are apprehensive that their cross-order items will not arrive on time. Access to internet tracking could persuade up to 69% of respondents to place a cross-border buy.

On their websites, cross-border retailers should also provide an anticipated delivery time. This would be a factor in 69% of respondents' purchasing decisions, since it would help them overcome concerns about the order not arriving on time.

Negative evaluations may be received by online merchants who are unclear about these additional expenses, resulting in lower conversion. According to the report, 60% of consumers believe that holiday sales or promotions will encourage them to buy from an overseas company.

V-Commerce: Will In-Car Payments Be The Next Big Thing?

According to new data from Ptolemus Consulting Group, by 2030, 600 million automobiles would produce $500 billion in in-car transactions.

Of course, the broad adoption of mobile payment means that the driving experience is already heavily linked with commerce, with many drivers attaching their smartphones to dashboards.

According to the 'Digital Drive' analysis conducted by Pymts and P97 in 2019, motorists are driving $230 billion in commerce on their everyday travels. Approximately 35.3% of commuters polled in the report utilised connected devices to order meals to pick up from a drive-through, while 33.4% ordered coffee to pick up in the same manner. Approximately 65 times each year, these commuters participated in both activities.

Consumers are also willing to increase how they spend time on the road with connected cars, in addition to their current behaviour. Almost a third of those polled in the 'Digital Drive 2019' report claimed they would shop online while riding in an autonomous vehicle. Ptolemus' analysis predicts that, at least in the short run, fuel and parking will account for the majority of the v-commerce market. However, content subscriptions, as well as food and beverage and grocery sales, are expected to contribute to growth.

Honda debuted its 'Honda Dream Drive' in-car experience with Visa in 2019, and it has subsequently expanded to include MasterCard and PayPal.

We're seeing more high-profile investments in the field in 2021, as well as firms developing technology that can be readily incorporated into connected vehicles – as well as through all payment networks, banks, and service providers. Car IQ, a fintech start-up, has raised $15 million in Series B funding and announced partnerships with Discover Financial Services and Blackberry.

The concept of a vehicle as a 'digital wallet,' in which it plays a larger and more integrated part in a person's life, could also aid in increasing customer loyalty to automobile makers.

Virtual idols are AI-developed characters who have a human-like appearance but are driven by cutting-edge animation technology. They imitate the behaviours of a real person by making lifelike facial expressions and body motions. Virtual idols are devoid of any content. When they're "born," they just have a voice and a look that their makers have created digitally.

Several other Chinese enterprises have relied on the dependability of these digital partners since the beginning of 2021. Florasis, a Hangzhou-based C-beauty company, unveiled its namesake AI ambassador, Centaine, a Chinese haircare company, introduced the virtual KOL Ling as its brand representative, and IDO, a China jewellery company, produced the digital idol Beco.

According to statistics from iiMedia Research, Ayayi, who was developed in May of 2021, is one of several AI influencers in China's virtual idol sector, which expanded to a value of $540 million in 2020, a rise of 70.3% YoY, and is predicted to reach $970 million this year. Local organisations are experimenting with digitally manufactured KOLs as idols continue to be a major marketing technique for driving company sales in China. These influencers are a safer option than stars Kris Wu, Zhang Zhehan, Zhao Wei, and Lucas Huang, who are all currently embroiled in scandals.

Luo Tianyi, a virtual vocalist, has become a virtual celebrity in the nine years after her "start." In 2019, she performed a hologram concert alongside Lang Lang, China's greatest pianist. Thousands of people packed the arena for the concert, which was a big success. Luo's fans have written songs for her, composed music for her, and drawn pictures for her.

These inventions have given her content and assisted her in developing a personality that the creator controls. Virtual idols, in comparison to real-life celebrities, are raised on user-generated content (UGC) and, to some extent, malleable to fans.

Aslada Gu, product & innovation director at Gusto Luxe, which helps clients with unique marketing solutions, says, “An apparent advantage of virtual celebrities is that their image is controllable.”

Virtual idols aren't just a passing fad; they're a marketing tool that businesses should start paying attention to if they want to connect with today's increasingly digitalized youth.” And, as the virtual idol market matures, iiMedia consulting analysts anticipate that the commercial worth of digital superstars will continue to rise.