With it becoming more and more necessary to use the new model in AdWords, Jed Brookes-Lewis considers how you can get the most from it.

“Change is painful but nothing is as painful as staying stuck.” - Narayana Murthy, Indian entrepreneur

The two quotes above display two vastly different attitudes towards change. Some view it as a necessary step to keep driving growth and moving forwards, others see it as an unnecessary risk.

Why take a chance in changing something if it’s all going swimmingly right now?

I mean, who doesn’t remember new Coke? (For those of you who don’t, Coca Cola changed their recipe in 1985 to a disastrous public reaction, swiftly reverting it 3 months later).

Despite digital marketing being a cutting edge, fast-paced industry, workers are notoriously touchy about updates to their favourite platforms and pieces of software.

First trialled in May last year, and now the default view, AdWords’ update is becoming more and more important as the old interface is being phased out. Soon, the little button allowing you to revert to the classic look will be gone, so now is as good a time as any to get the lowdown on what’s new.

If I could capture my initial sentiment when I first logged into AdWords and saw the new interface, it would be “well this is shiny”. The old interface was starting to show its age in terms of design, resembling something from the early 2000s when compared to newer platforms.

With the new look, this all changes. Moving between the various features is seamless and load times definitely feel like they have been cut significantly. To put it simply, whereas before we were happily chuntering along in the middle lane, this has knocked it up a gear and sent us flying.

All About The Overview

Probably my favourite new feature is the overview reporting, which allows users to get an instant snapshot of various performance metrics when they log in, including campaigns, devices, ad scheduling and more.

This can be taken at an account level or broken down for specific campaigns to offer a more granular view. The best thing about this data is that far from just being pretty, it offers actionable insights which can be put in place immediately. 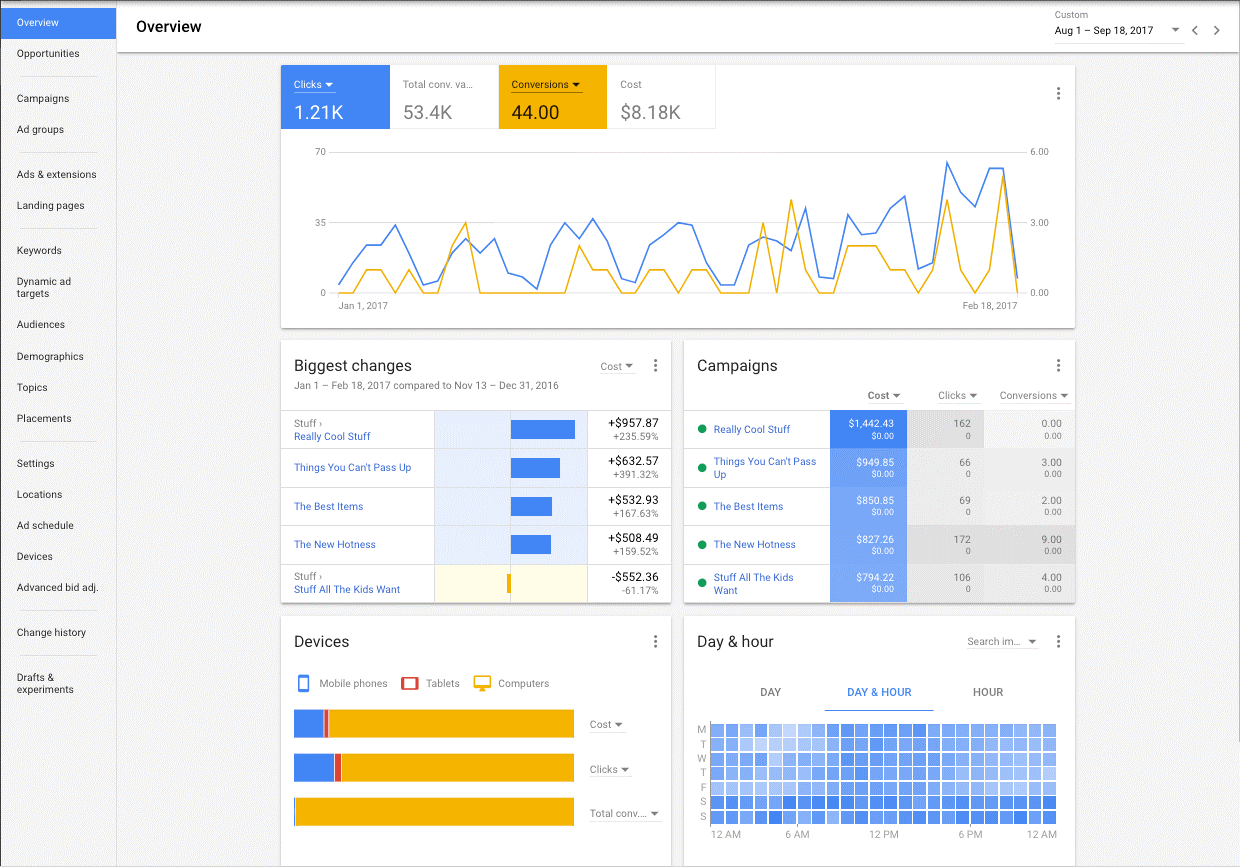 More and more features are being made exclusive to the new interface. After a successful beta in 2016, promotion extensions - which allow you to display promo codes and discounts underneath a standard search ad, were launched with the only way to add them being through the new interface.

We also see this with advanced bid adjustments for call extensions, showcase shopping ads and targeting by household income. It’s obvious that, moving forwards, this is going to be Google’s leverage in moving people across, with fewer and fewer new opportunities being available in the old interface.

Change is never easy and switching over to the new view does take a little time to adjust to. However, with the time looming when the switch will be made mandatory, it’s better to handle any teething issues now, at your own pace, rather than have it forced upon you.

There are a lot of useful features and with the platform updating and evolving consistently, now is as good a time as any to get on board.

If you'd like to chat with us about this new interface, or if you have any questions, don't hesitate to get in touch.

How to Build the Perfect Ad Creative

Ad creative poses challenges that can make or break a campaign. Find out how to build the perfect ad creative with our helpful blog.