Posted in International Marketing
On 19 Nov 2021
By Andrea Diaz

Find all of the latest international marketing news, from marketplaces being research hubs to trade deals and more.

This week in the international newsletter we see how product search starts in the marketplace, the EU and UK likelihood for a new deal, the economic impact between UK and EU trade and Gen Z trust issues against big corporations.

Generation Z is the most racially, ethnically, and sexually diverse generation in history, including children, teens, and young people born between 1997 and 2012. Brands trying to win over Gen Zers must understand how they grew up, what they believe in, and what makes them tick as this generation evolves into a distinct and powerful consumer group.

Companies and brands who want to win the loyalty and patronage of Generation Z must first address their considerable trust issues.

They don't want to feel exploited by businesses that acquire and use their data.

Not walking the walking and talking the talk irritates Gen Z, and they have a high "BS meter" for organizations that actively mislead customers or obfuscate facts.Communicating truthfully and transparently, taking meaningful actions to preserve privacy, and integrating company vision and values with the causes and concerns that matter to their customers are all examples of good practices. 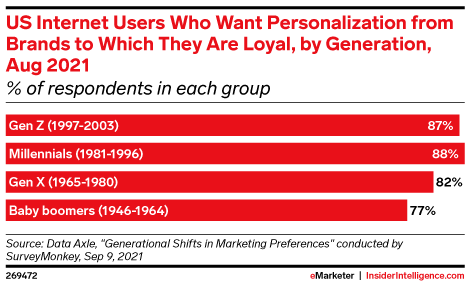 Almost Half Of All Product Searches Start On a Marketplace

Marketplaces like Amazon and eBay are the starting point for 44% of all product research. They account for the majority of searches, with search engines accounting for only 19%. These are some of the findings of a new analysis from Inriver that looks into online purchasing habits and preferences. The poll included 6.000 customers from the United States, the United Kingdom, and Germany.

Only 9% of initial product searches are conducted on a company's website. This increase was especially noticeable among customers aged 18-24, with up to 52% using marketplaces as a starting point vs only 18% using search engines. According to this survey, brand loyalty is becoming less essential to customers. If retailers selling on marketplaces wish to compete, they must ensure that their content is optimised.Only 14% of those interviewed stated they would not switch to a competing product if their preferred option was unavailable. Not only is unavailability a concern, but more than two-thirds (69%) of customers avoid purchasing products with inadequate descriptions. Product information is a key component in up to 83%  of buyers' purchasing decisions.When confronted with inaccurate product information, at least 45% of the respondents become frustrated, and 82 percent of customers will hunt for information about a product in various places. These findings suggest that online retailers should improve their product information and ensure that it is consistent across all platforms.

Thomas Zanzinger, CEO of Inriver, said: "Brands can no longer rely solely on their name to close deals. To fight fierce competition on the digital shelf, marketers must guarantee they're satisfying customer expectations both of the product and in the purchasing journey."

Hopes for a New Eu/UK Trade Deal Are Rising

With the EU willing to back down on certain unresolved concerns surrounding the Northern Ireland Protocol, a new deal for post-Brexit trading arrangements in Northern Ireland might be achieved by Christmas.

According to the Telegraph, European Commission officials have pointed at a possible settlement and dialled back threats of reprisal over Britain's preparations to invoke Article 16.Tony Connelly, Europe Editor at RTE, has since tweeted that the EU is proposing that its prior pledge of a 50% reduction in customs formalities on goods going from the United Kingdom to Northern Ireland "become a legal duty rather than a general goal."

According to a report released this week by the UK Trade Policy Observatory, the terms of the EU-UK Trade and Cooperation Agreement (TCA) caused UK exports to the EU to drop by 14% and trade in the opposite direction to drop by almost a quarter in the first seven months of its implementation – a combined blow to the UK economy of around £44 billion (UKTPO).The UKTPO research examines the period between January and July this year, using three econometric techniques to remove confounding factors such as the Covid-19 pandemic, revealing the extent to which new regulations and customs formalities introduced since Brexit are hampering Britain's business with its largest trading partner.The UKTPO estimates that £32.5 billion in potential imports to the UK and £11 billion in exports to the EU have been lost in goods trade, while the Brexit effect was felt even more strongly in the services sector, with a 12% loss in exports and a 37% decline in imports.

“The evidence our analysis has uncovered on the impact of UK services trade reflects some of the worrying costs of Brexit for the UK economy”, says Guillermo Larbalestier, UKTPO research assistant in international trade. "UK trade with the EU has decreased so dramatically since the TCA was implemented that it has harmed the UK's post-pandemic economic recovery."Tariffs are one of the most significant concerns revealed by the UKTPO's investigation. The TCA contains 100% tariff liberalization, with no duties or quotas placed on goods movement between the two sides, which is a first for the EU. This criterion, however, is only valid if exporters can demonstrate that their goods comply with regulations of origin, which is typically a difficult undertaking for which many businesses are unprepared. Failure to comply with the documentation criteria for qualifying goods results in the payment of customs duty.In total, tariffs were imposed on UK exports to the EU worth between £7.89 billion and £10.56 billion in the first seven months of the new trading circumstances, according to the UKTPO. Taxes on some agricultural products can reach 50 percent, while tariffs on numerous textiles and clothing items are placed at 12% or 16%. According to the research, the foregone duty savings amount to a staggering £534.6 million.Given the importance of the EU as a trade destination, the UKTPO claims that the increasing costs and complexity are having a negative impact on a variety of exporting sectors. Footwear and headgear, which has seen exports drop by 77.2%, textiles and clothing, which has seen exports drop by 60.2%, and vegetable products, which has seen exports drop by 43.5%, are the worst-hit industries, afflicted by continuous and protracted losses.According to the UKTPO's research, losses have continued into the second quarter. The TCA's criteria effectively indicate that the spectre of Brexit will continue to stalk Britain's trading performance for some time to come, far from giving tariff-free, quota-free access to the EU market.