International Marketing News: The Latest Development of the UK-Japan Trade Deal and Four Top Points to Note for Reels

Posted in International Marketing
On 14 Aug 2020
By Alison Booth

Our international marketing expert, Alison Humphries, is back with another roundup of the latest news stories you need to know about. From the UK-Japan trade deal to out-of-home advertising, read more.

International Marketing News: The Latest Development of the UK-Japan Trade Deal and Four Top Points to Note for Reels

What's new, important and interesting in the world of international marketing? This week we look at the introduction of Reels into the global social media arena, the growth of digital out of home advertising, UK and Japan’s trade negotiations and the growing presence of Chinese companies on the Fortune Global 500 list.

On Wednesday 12th August, Reels launched in the US in more than 50 countries. Reels is a new feature that allows you to edit and publish short videos on Instagram of up to 15 seconds in length that are set to music, explains eConsultancy.

Reels launched under the name Cenas in November was first tested in Brazil before being rolled out to France and Germany on 24th June, India on 8th July and finally, the US, UK and 50 additional countries on Wednesday.

The Wall Street Journal reported that Reels offered lucrative financial incentives to encourage TikTok’s top influencers to post exclusively on Reels, or, where they wouldn’t switch allegiance, to post on Reels first. These influencers included big names like Selena Gomez and Miley Cyrus, amongst others. While this may not guarantee success, as users must be interested in the platform, it helped to create a buzz around it.

2. Brands have already started to see success on Reels

Louis Vuitton has created short videos to promote its new collections, Sephora has been experimenting with a range of fun concepts and Red Bull has been posting stunt videos. Brands who already post on TikTok have nothing to lose by testing Reels, and for brands that have a strong following on Instagram, but have never used TikTok, testing short video content offers a great opportunity.

3. Instagram’s promotion of Reels takes a ‘creator-centric’ approach to allow for organic discovery

TikTok’s ‘For You’ tab is a key part of the platform’s success, which curates content based on a wide range of signals to keep the content fresh.

Instagram looks to be emulating this strategy through displaying a selection of rotating Reels at the top of the Explore tab. Some are determined by the algorithm and others are handpicked by Instagram’s team, which looks to be an effort to encourage users to create new Reels.

4. The timing of Reel’s launch, just as TikTok could potentially be banned in the US, could prove very fortuitous for Instagram

Rumours circulating of a potential buyout by Microsoft following Trump’s threat to ban TikTok could result in TikTok being reluctant to let another company gain control of its prized algorithm. If the platform isn’t run in a “hands off” fashion there could be a problem, with Microsoft potentially substituting its own inferior version.

The impact of TikTok’s ban in India resulted in influencers adapting by becoming more active on Instagram. US influencers are being given some warning and can look to adapt their strategies ahead of any changes taking place.

In 2020, DOOH (Digital Out-Of Home) ad spend will account for one third of total US OOH ad spend, which is a significantly higher percentage than 2015 when this was only 17%. This is forecasted to increase to 42% by 2023. 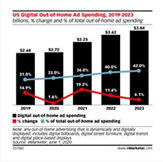 Outdoor advertising has traditionally been based around awareness and upper funnel branding, whereas digitisation has increased the frequency of direct response and direct to consumer advertisers using OOH.

UK AND JAPAN TAKE STRIDES FURTHER TO A TRADE DEAL

According to Institute of Export & International Trade, the UK and Japan have made their agreement more substantial in most areas of trade negotiations, which could become the first post-Brexit deal.

Japan is keen to form an agreement quickly to ensure smooth continuation of trade with the UK. A deal will need to be agreed by early Autumn for ratification before the end of the year.

The existing EU-Japan deal will be built on with the UK pushing for further regulatory alignment and market access in financial services, digital and eCommerce.

The UK hopes this will kick start the Comprehensive and Progressive Agreement for Trans-Pacific Partnership (CPTPP) – a multilateral agreement between 12 countries including South Korea and Australia.

The sticking points in the negotiations with Japan are automotive access and agricultural products with Japan giving in on attempts to increase the volume of Japanese cars and car parts entering the UK.

The current 10% tariff for automobiles will be reduced to zero over a period of eight years.

Japan has sought to reduce access to its market for British farmers, which Liz Truss, UK trade secretary, has pushed back on.

JingDaily highlight the increase of Chinese companies in the Fortune 500 list at 133 vs. 121 – in fact, three Chinese companies hold five of the top slots (Sinopec Group, State Grid and China National). Other top performers include Huawei (49) and Tencent Holdings (197).

The growth in the success of Chinese companies has been rapid, with China being absent when the list started in the 1990s to now topping the ranking with the challenges of COVID-19 failing to halt their growth.

The announcement of the ranking coincides with the current disagreements between the US and China. WeChat could be the latest victim of the executive order. However, this may not play out, as Chinese consumers continue to use it to make payments. The latest rankings prove that Chinese companies continue to remain successful despite the current challenging trading environment in the US.

If you would like to discuss any of the stories discussed in this roundup, get in touch with our international marketing experts today.